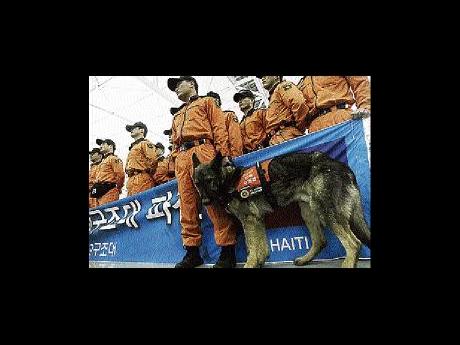 Members of the Korea Disaster Relief Team with a sniffer dog are ready to depart for quake-hit Haiti in a ceremony at the Iuncheon International Airport in Iuncheon, South Korea, last Friday.

Rescuers who heard scratching sounds pulled a security guard from the United Nations headquarters building that collapsed in the Haiti earthquake, "a small miracle" as 36 UN personnel were confirmed dead and nearly 200 remained missing, the head of the world body said.

Secretary-General Ban Ki-moon said the crew located Tarmo Joveer, an Estonian guard, under about four metres (13 feet) of rubble. He was given water through a rubber tube until he was pulled out covered in dust but unhurt, the UN said.

Ban said the UN's mission chief, Hedi Annabi, and his chief deputy, Luis Carlos da Costa, are among roughly 100 people still buried in the rubble of the five-storey building. The other missing UN personnel were in other buildings and facilities.

"It was a small miracle during a night which brought few other miracles," Ban said.

Speaking by videoconference from Port-au-Prince, David Wimhurst, a spokesman for the UN peacekeeping mission, said Joveer "walked out of there unscathed. ... He was very, very grateful to be alive."

Wimhurst said early Thursday afternoon that the dead include 19 UN peacekeepers, four international police officers and 13 civilians. The injured include 26 military, nine police and 38 civilians, of whom 24 are Haitian nationals.

Rescue teams from China, the United States, France and the Dominican Republic have arrived with dogs and listening equipment and Ban said more teams would be arriving soon.

Wimhurst said a French team was still working at the collapsed UN headquarters building, formerly the Christopher Hotel, which was built into the side of a hill.