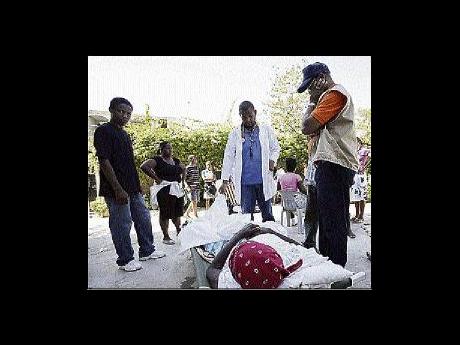 It wasn't long after Tuesday's earthquake levelled nearly all of the houses next to Claude Surena's that neighbours started showing up at his doorstep.

For years, the 59-year-old paediatrician had treated the sick at his two-storey hillside home near the centre of the Haitian capital.

Suddenly, he was running a triage centre, treating more than 100 victims on his shaded, leafy patio with food and supplies salvaged from ruined homes.

His undamaged house provides at least a minimum level of comfort away from the devastation - even for the dying - while thousands of others in the city lie in the dirt under a merciless sun waiting for attention from a handful of doctors.

"I have to thank whoever brought me," said Steve Julien, who says the last thing he remembered before he blacked out was rescue workers calling his name as they dug through the rubble of his house.

When he woke up, he was lying on a mattress inside Surena's soothing oasis.

"It was a blessing from God my house is safe," he said. "We at least have been able to do something for everyone."

The patients show physical and emotional wounds from having their homes collapse on them. Julien, 48, is among the least severely injured, with only a few scrapes and a sore body. Others have compound fractures and festering wounds. Surena said at least 10 patients are in critical need of more substantial help.