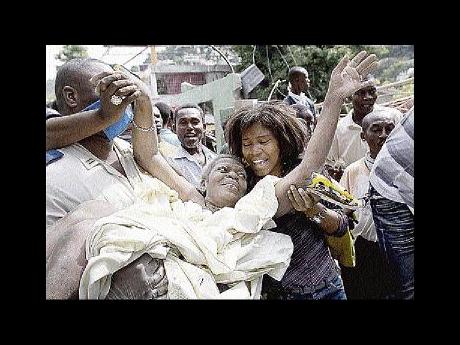 Gladys Louis Jeune is pulled alive from the rubble of her home in Port-au-Prince nearly 43 hours after Tuesday's earthquake, where she was greeted by her ecstatic daughter last Thursday.

The St Catherine Parish Council has joined those responding to the disaster in Haiti, with a $100,000 donation from the 40 councillors in the parish.

Dr Andrew Wheatley, chairman of the council, made the announcement at the general council on Thursday, stressing the need for a united effort in the face of this disaster.

"It is a time for all to work together, our aim at the council is to collect $500,000 by next week Friday to be sent, " Wheatley said.

His sentiments were echoed by councillor for the Hellshire division, Leon Thomas, who made the first donation of $5,000.

"I think it is a very good thing to see the unity over the disaster of our Caribbean neighbours," Thomas said.

The council said that its aim is to collect any items or donations that it can, which will help to bring stability to the country which has had its fair share of natural disasters.

Meanwhile, a number of businesses in the parish, including the St Catherine Co-operative Credit Union, have committed to supporting the cause.