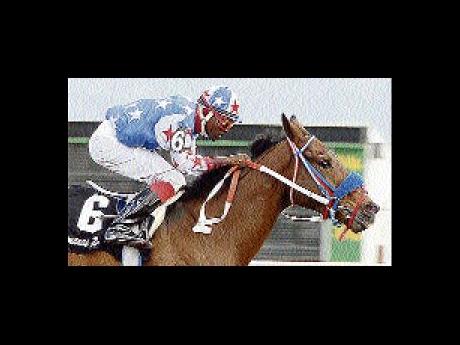 Both were involved in a dead heat for first in the eighth race. Walker brought the 1-2 favourite HEART OF GOLD with a tremendous late run on the outside to catch the front-running 5-2 chance LAWS OF THE CAT under Dane Nelson in the final surge. However, the photo-finish camera was unable to separate both horses and it was declared a dead heat.

Having returned to the saddle on the previous Saturday after being sidelined for two months with injury, Walker won the second race aboard 1-4 favourite PICCOLO for trainer Grayden 'Kingsley' Rose, then followed up aboard 3-2 second favourite GOOD SENSE in the very next race for the Colin Melhado Memorial Cup (high claiming) over 1200 metres.

GOOD SENSE broke well from the outside post position in the seven-horse field and enjoyed a clear lead over MAGDALA and DANIELLE MY GIRL into the straight. But in the end he had to be shaken up in order to stave off the fast-finishing MING LEI (7-2) on the rails by three-quarter length.

A five-year-old bay gelding by Pat N Jac out of Megan Way, GOOD SENSE was notching her second consecutive win, having been claimed for $350,000 out of his previous race as a winner on Boxing Day. He is trained by Fitzgerald Richards for owner Noril Atkins.

Walker has now ridden five winners to be joint second in the standings with Paul 'Country' Francis and Andre Martin, both of whom rode a winner on the card. Nelson, meanwhile, won aboard 5-2 chance ALIAS MR CAT and LAWS OF THE CAT, both for trainer Carl Anderson, and 12-1 chance SHAWN'S GIRL, who stormed through on the inside leaving the furlong pole to win the sixth race over 1300 metres by five lengths.Anderson and champion trainer Wayne DaCosta saddled two winners each on the 10-race programme, while the Enos Brown-trained SHAWN'S GIRL and the stretch-running HAIL THE GENIUS at 17-1 in the ninth race over 1400 metres for overnight allowance horses provided the upsets.

Outpaced in last position as GRACE MARIE and TOBAGO alternated the lead, HAIL THE GENIUS, with 4.0kg claiming apprentice Aaron Chatrie aboard, made rapid headway approaching the home turn, then swept past the 3-4 favourite SKITTLE QUEEN (Walker up) on the inside a furlong out for an easy victory. Seven ran.

A six-year-old bay gelding by Hail Orphan out of Ingenius, HAIL THE GENIUS is owned and bred by CTL's Deputy Chairman Raphael Gordon and trained by Gary Subratie.