Sunshine Girls get 'home' in Barbican 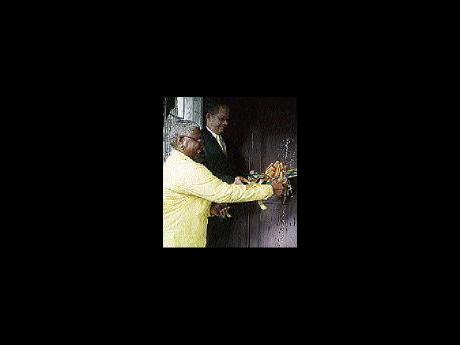 The Jamaica Netball Association (JNA) was presented with keys to a five-bedroom house by Prime Minister Bruce Golding, during a handover ceremony held on the lawns of the property 17 Widcombe Road, Kingston 6.

The house is called 'Sunshine Chalet', or simply 'Netball House', and will be used, among other things, to house players from the various national programmes during training camps, seminars and meetings.

"Today is cause for celebration. Today, you have found a home and wherever it is that you may have laid your heads these many years, no one can ever look at you again and say it's time for you to go find somewhere for yourself. Today, you have your 'owna' door keys," Golding said.

Grange told the gathering that her ministry would be doing its best to assist the JNA.

"This afternoon is a very special one in the lives of the Sunshine Girls, because we can all agree that the Jamaica Netball Association is more deserving of this wonderful house," said Grange.

"On numerous occasions, as the minister of youth, sports and culture, I have assured Marva (Bernard) and the JNA that the ministry will do all that it possibly can in support of Jamaica's netball," Grange added.

"I am so overjoyed and very humbled by this," said an elated Bernard.

"This is ... it's a dream come true for us," she said. "It's several years of dreaming come true, and I must thank the Government, and the prime minister in particular, for making this happen."

Bunk beds will be placed in the house, which can accommodate up to 20 individuals.

Last year, the JNA spent over $1 million towards accommodation of its players from various squads, with the housing of the under-21 squad, which was in camp for a significant period ahead of the World Youth Netball Championships in August, accounting for $854,754.