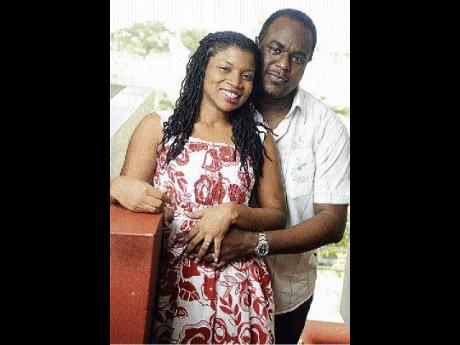 Lesia and Mark Gregory, authors of The Marriage Thermometer Principles: A Handbook on Marriage, Love, Intimacy and Friendship, a new book on maintaining a good marriage. - Ricardo Makyn/Staff Photographer

Husband and wife counselling team Mark and Lesia Gregory have taken a leap into the publishing world by writing their first book, The Marriage Thermometer Principles: A Handbook on Marriage, Love, Intimacy and Friendship.

The Jamaican couple, who have been married for 12 years, are counsellors and wedding planners. They began counselling married couples and engaged individuals through their church, The Kingston Church of Christ.

Their 10 years of experience, through the church, resulted in many couples coming to them for advice.

"We found that many people kept coming to us to ask 'how do you do this' or 'how do you do that'? So, about a year ago, instead of repeating ourselves, we decided to put it in a book," said Mark Gregory.

The book, which took approximately a year and a half to be completed, is an aid for both married couples and engaged couples. It forms a part of the Marriage Thermometer Principles, which starts with a couple using the free Marriage Thermometer Software to determine the temperature range of their relationship, whether it's from hot to freezing. Then, they return to the book.

It deals with strategies on coping with an abusive spouse; ways to make your husband feel respected and your wife feel loved; dealing with in-laws; building moral, ethical and spiritual family values; how to improve your sex life; how to avoid or survive your spouse's infidelity.

But one of the lynchpins and topic they say that catches a number of people's attention, is how to resolve conflicts in 15 minutes or less.

"(In) The first year of marriage, we made a decision that we weren't going to go to bed upset with each other. You know, the Bible speaks to that, but we realised we had to put practical things in place to do it," said Lesia Gregory. So they decided they would decide beforehand how they will handle disagreements. Once the argument begins, the person who is the least upset would initiate a prayer.

"In the middle of an argument, one of us will say 'let's pray, because we're Christians'," she explained.

"What that does is that it puts you in a humble zone," Mark added.

This allows each person to explain to God in a rational way what he/she is thinking and it, very often, opens the eyes of the other person to what he/she was trying to say.

The next step is to ask, is this worth our marriage? "Most arguments or disagreements, they're not really worth it," Lesia said. This allows people to avoid petty arguments like leaving the toilet seat up or squeezing the toothpaste incorrectly.

Lesia, who wrote most of the practical aspects of the book, is a graduate of the University of the West Indies, where she pursued library studies. Mark, an architect, wrote several stories in the book.

"We have several stories. Things that have worked for us, experiences we have had, other people's experiences that they've shared with us and things we've seen," he explained.

They said two things which many couples are often curious about are building respect and maintaining intimacy in the relationship. Lesia said they work hard at this, employing activities like salsa dancing and taking three vacations per year together.

The book, which retails for an average $1,800, is available at local bookstores, and at: www.marriagethermometer.com, amazon.com, among others.