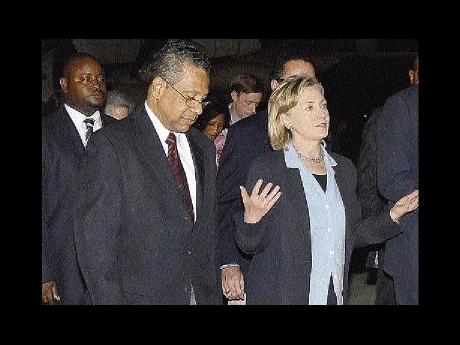 Deputy Prime Minister and Minister of Foreign Affairs and Foreign Trade, Dr Kenneth Baugh (second left), gets a quick briefing from United States Secretary of State Hillary Clinton, as they walk to the VIP Lounge at the Norman Manley International Airport in Kingston on Saturday night. - JIS

In Haiti's time of need, the Jamaican Government has opened up its bowels of compassion to its Caribbean neighbour by freeing up its ports and shores to humanitarian assistance heading to Haiti and fleeing Haitians.

Daryl Vaz, minister with responsibility for information, said on Saturday that Prime Minister Bruce Golding had made it clear that no Haitians found in Jamaican waters should be turned away.

The Government, on Friday, announced that Jamaica would waive all landing fees and invite aircraft parked in Haiti to come to Jamaica in a bid to free up space on the tarmac in Port-au-Prince so that more aid could get into that country.

Despite the health fears being raised, Vaz was unequivocal in relating the prime ministerial edict given to him and Major General Stewart Saunders, chief of defence staff of the Jamaica Defence Force.

"The directives by the prime minister is that we are not to turn back anybody based on the situation and, therefore, we making all the arrangements, especially in the areas of Portland and St Thomas, in terms of immigration, in terms of health, in terms of accommodations," said Vaz.

The minister, who said of Haiti, "the place is absolutely a disaster", believes the nation needs to be prepared, as Haitians, fleeing their impoverished and now devastated country, were inescapable.

"That is something we have to put in place because it is almost inevitable," Vaz said.

The Cabinet minister advanced that it was only a matter of time before the airports of the Dominican Republic, which shares a border with Haiti, became as congested as the Port-au-Prince airport, therefore Jamaica stood ready to play host.

"After there (Dominican Republic), Jamaica is the next stop geographically," he said.

Vaz added that the various governments had been advised about the parking facility being made available.

"We have waived all the navigation and landing fees to all humanitarian aid by way of aircraft to allow them not only to come and stay here while the recovery effort takes place, but also to indicate to them that we can offer refuelling facilities here in Jamaica," he said.

The Government also offered the Reynolds Pier in Ocho Rios, St Ann, to Haiti-bound vessels transporting humanitarian aid as a point where the ships in the area can restock with potable water.

"We have offered that to all humanitarian vessels that will be passing in the region en route or on return from Haiti," Vaz said.

United States Secretary of State Hillary Clinton says that Jamaica's efforts would be pivotal to the recovery of Haiti.

She also praised the Jamaican Government and people for the assistance already given to the people of Haiti, and asked that the lines of communication with the US government remain open.

Clinton had made a brief stop at the Norman Manley International Airport after a fact-finding mission to Haiti.

Mrs Clinton met Haitian President René Préval and representatives of relief several agencies in Haiti to strategise a cohesive relief response, but felt that there was a need to discuss issues with Mr Golding on the developments.

Food For The Poor has also offered its compound in Haiti to the Jamaican contingent involved with the relief-and-recovery efforts. This will be a major boost for Jamaica's efforts, as the site is only two miles from the airport and has equipment and vehicles vital for the purpose.