The Reverend who wants change 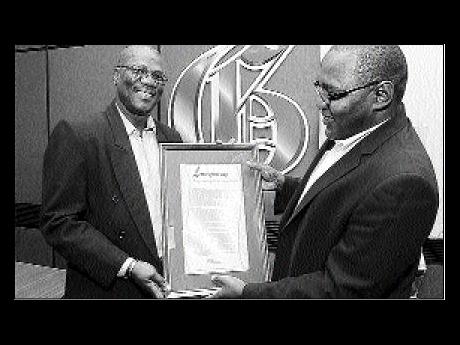 Garifeld Grandison (right), editor-in-chief at the Gleaner Company Ltd, presents Reverend Dr Paul Gardener, president of the Jamaica Council of Churches, with a framed copy of his letter, which won the Silver Pen award for November. - Ricardo Makyn/Staff Photographer

One concerned citizen is expressing disgust about the process of appointing persons to government positions, saying that there were too many disruptions and too much uncertainty when there is a change of Government.

"As a nation we need to spend a lot more time planning and visioning than to squabble about positions," Reverend Dr Paul Gardener said.

In his quest to promote change, Gardener wrote an appealing Letter to the Editor, which earned him the prestigious Silver Pen award for November.

"There has to be a better way in terms of how we go about it (political appointment)," he said.

Gardener noted that if there were going to be political appointments, everyone should be made aware of them.

Alluding to the American system, which he acknowledged Jamaica could not always follow because of the differences in their respective democratic models, Gardener said, "If persons are aware that these key positions are political appointments, then they would be aware that persons would have to be changed if there is a change in th administration."

In his letter, 'Change Terms Of Public Sector Appointments', Gardener said the country must re-examine the way it appointed persons who hold certain positions in the public sector.

These persons, he said, should be brought before the Parliament, where they could be thoroughly cross-examined.

Gardener noted that new approaches were necessary to pull the country from anarchy and perpetual underdevelopment.

However, he remained optimistic about the future of the country, saying a deal with the International Monetary Fund (IMF) was to be seen as an opportunity.

"I have a feeling that we have been forced into this position and it is incumbent on us to use this occasion as a platform for the future development of the country," he said.

He committed himself to be part of the process of bringing about change in the country.

"The pearl of the Caribbean - Jamaica - could be pretty near to being bankrupt and that is sad, but I think we have the sense of character and the creativity to pull through the difficult times," he said.