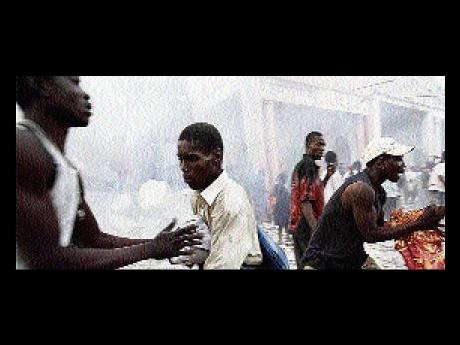 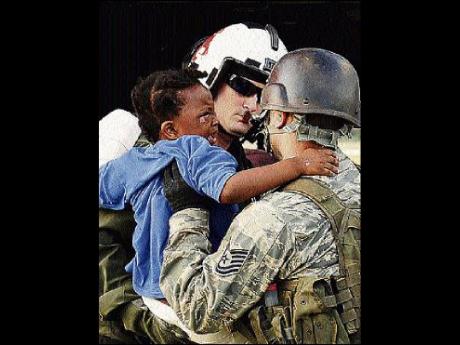 Looters fight for goods taken from collapsed buildings in Port-au-Prince on Sunday. United Nations peacekeepers patrolling the capital said popular anger is rising and warned authorities and aid organisations to increase security to guard against...

Troops, doctors and aid workers flowed into Haiti yesterday, even while hundreds of thousands of quake victims struggled to find a cup of water or a handful of food.

Looting spread to more parts of downtown Port-au-Prince yesterday as hundreds of young men and boys clambered up broken walls to break into shops and take whatever they can find. Especially prized was toothpaste, which people smear under their noses to fend off the stench of decaying bodies.

At one place, youths fought over a stock of rum with broken bottles, machetes and razors and police fired shots into the air to break up the crowd.

"I am drinking as much as I can. It gives courage," said Jean-Pierre Junior, wielding a broken wooden plank with nails to protect his bottle of rum.

Less violence than before

Even so, the United States Army's on-the-ground commander, Lt General Ken Keen, said the city is seeing less violence than before the earthquake.

US officials say they have 1,700 US troops on ground now and expect about 10,000 either in Haiti or on ships offshore soon. While aid workers tried to make their way into Haiti, many people attempted to leave. Hundreds of US citizens, or people claiming to be, waved IDs as they formed a long line outside the US Embassy in hopes of arranging a flight out of the country.

The Pan American Health Organization estimates 50,000 to 100,000 died in Tuesday's 7.0-magnitude quake and Haitian officials believe the number is higher. Many survivors have lost their homes and many live outside for fear unstable buildings could collapse in aftershocks.

In this January 16 photo released by the US Navy, Naval Air Crewman Second Class Jason Harold, of Goldsboro, NC (left), transfers a young Haitian earthquake victim from a helicopter during a medical evacuation in Port-au-Prince, Haiti.