Half million goes to refugee preparedness 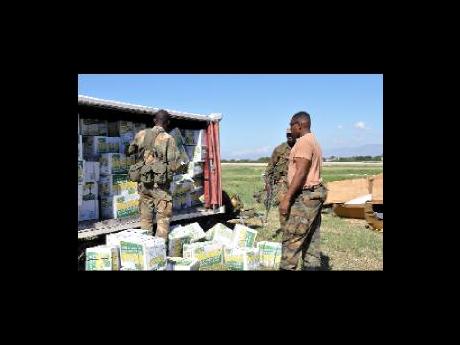 Soldiers unload food supplies at the Jamaica Defence Force (JDF) camp. The JDF camp was erected close to Haiti's sole runway in Port-au-Prince between the military camp hosted by the Canadian army and the United States search and rescue team.

With the country bracing for an influx of Haitians fleeing their earthquake-hit country, a corporate entity is helping.

Digicel Business has committed a total of $500,000 to be donated to the Department of Correctional Services in Jamaica.

The company will donate $300,000 in cash and $200,000 in Grace-Kennedy food vouchers to further assist with all relief efforts.

Information from Digicel is that the funds will be used for repairs to buildings and property located in the island to house refugees, as well as to provide medical care.

Mark Linehan, CEO Digicel Jamaica, said the company, which operates one of the largest telecommunications businesses in Haiti, has been integral in bringing relief to Haiti.

"When Digicel launched in Haiti in 2006, Haitians welcomed us with open arms. Now, with over two million customers relying on Digicel to keep in touch with friends and family, we are determined to be there for them in their time of need," he said.

Permanent Secretary in the Ministry of National Security, Major Richard Reece, welcomed the assistance by the group, saying it was for a worthy cause.

"They will need all the assistance they can get in this effort, whether in Haiti or in Jamaica," Major Reece told The Gleaner.

He said the facilities had already been identified to house Haitians likely to seek refuge in the country, but he was unable to disclose the locations.

Last week, Digicel donated US$5 million in cash to support the relief efforts.