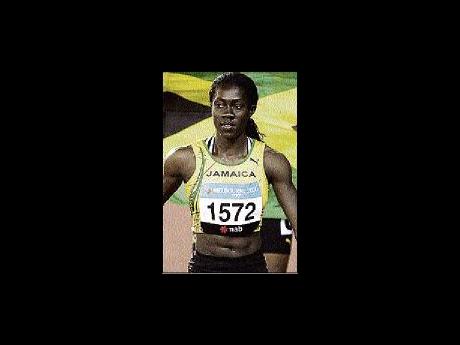 The immediate future of sprinter Sheri-Ann Brooks is still "up in the air", haunted by a drug testing controversy that prevented her from representing Jamaica at the World Championships in Athletics (WCA) last August, and is stalling her return to the track in 2010.

According to agent Kris Mychasiw, the 26-year-old reigning Commonwealth Games 100 metres champion will not compete until she receives official clearance from the International Association of Athletics Federations (IAAF), track and field's governing body, although the doping case against her was thrown out by the Jamaica Anti-Doping Commission's (JADCO) Disciplinary Panel six months ago.

"She was cleared by Jamaica," explained Mychasiw on Wednesday, January 13. "The rest of it is still up in the air."

This season for the Florida-based Brooks remains in limbo, despite her management team's claim that she wants to run the 60 metres at the World Indoor Championships in March in Doha.

Her participation in the outdoor season later in the year, which could include the Commonwealth Games in India, is also in doubt.

"We're not 100 per cent sure she's going to be competing this season," Brooks' Jamaican-born coach Marlon Malcolm said, also on Wednesday last.

Both Mychasiw and Malcolm confirmed that Brooks has been training. The agent explained she has overcome the devastation of the doping allegation and missing the WCA.

"Last time she was a mess," said Mychasiw. "But she's in the right place now."

The coach believes her passion for track remains intact.

"She still loves the sport," Malcolm said. "Nothing has changed where the sport is concerned."

Brooks last competed at a meet in Europe on July 22, but did not run at the WCA in Berlin, Germany, despite qualifying for the 100 metres at the national trials in late June.

Brooks' first - or "A" sample - tested positive for a banned stimulant. But she was later cleared on a technicality by the local panel after it was determined that a second - or "B" sample - was not tested in the presence of Brooks or her representative, as required by the World Anti-Doping Agency.

Despite the panel's decision, Brooks was withdrawn from the WCA.

Neither Blake, Fothergill, Spence nor Anderson competed in Berlin. Each received a three-month ban by the IAAF in September.

Yet, according to her agent, Brooks has received no ruling.

The agent said a lawyer representing Brooks has been urging the IAAF to speed up the process.

"We have asked that they (IAAF) look at it quicker," said Mychasiw.

Efforts to get an update on Brooks' case from the IAAF were unsuccessful.

The athlete could not be contacted either, but her management team insists she is ready to race.

"If she was cleared tomorrow she'd run as soon as next weekend (this weekend) in Miami," Mychasiw said.

However, her coach believes that while Brooks has a more flexible preparation timetable for the outdoor season, a decision on when she runs indoors must be made soon if she is to perform at her best.

"If it's for the indoors she will have to make the decision by the first week of February," said Malcolm. "If it's for outdoors we have plenty of time."