Harbour View focus on third round 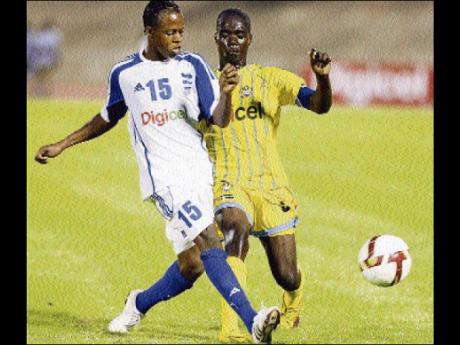 After getting the better of long-time foe Waterhouse inside the National Stadium on Sunday night during the Digicel Premier League second End-of-Round final, overall league leaders Harbour View are now focusing on maintaining their advantage going into the final stretch.

Captain Lovel Palmer was almost lying on the ground, literally inches from the turf, as he met André Steele's cross with a vicious volley in the 13th minute to hand his team a hard-fought 1-0 victory.

It was a goal worthy of deciding any final, but as far as the 25-year-old utility player is concerned, it's all in the past.

Palmer, a national representative, sought to give the assurance that he has already forgotten about the game-winning goal and is now looking forward to his team's first third-round match against Sporting Central Academy, and the overall championship race.

"When we play against Sporting Central in the first game of the third round, we just have to play it as if it's the last game of the season and we need those three points to win the league. We'll approach every game like that," said Palmer.

"All the teams in the league must be doing something good to be among the top 12 in the country, so we have to respect everybody. We just have to go out there and take every game as if it's a final like tonight (Sunday night) and take it a game at a time."

Coach Donovan Hayles, who expressed satisfaction with the efforts of some of his younger players, agrees with his captain.

"We have to keep our feet on the ground, we cannot get overwhelmed with this victory, we just have to move on. There is another round to play and it's going to be harder than the others," said Hayles.

"I'm very proud of the Harbour View youngsters; they came and they showed that they have quality. They are not Under-21 players, they are Premier League players and they came and proved that," Hayles said.

Waterhouse's Geoffrey Maxwell congratulated his opponents on their victory, but lamented his team's inability to convert countless chances into goals. The ever-vocal Maxwell was, however, quick to point out that his team's confidence will not be affected by Sunday night's loss.

"I want to congratulate Harbour View. I think we played very well, we got the chances and didn't put them away. Harbour View got one solid chance, excellent goal, beautifully taken. I just thought the discipline in midfield was very poor from us," said Maxwell.

Waterhouse's midfield livewire, Kenardo Forbes, reiterated his coach's point and underlined their desire to bounce back from the setback.

"I don't think it will affect the team's confidence at all, we all considered this an incentive final, even though we wanted to win it. Unfortunately we didn't so we just have to push on; there is no time for complacency," said Forbes.