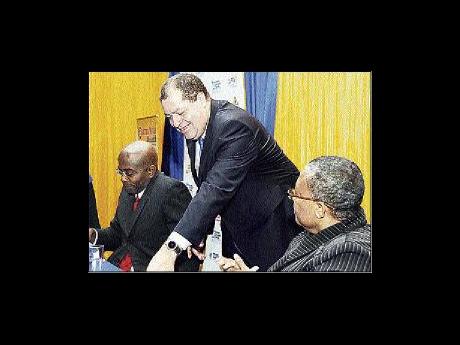 Minister of Finance and the Public Service Audley Shaw speaks with Marlene Street-Forrest, general manager of the Jamaica Stock Exchange, as he takes his seat at the start of the JSE Capital Markets and Investment Conference 2010 at the Jamaica Pegasus in New Kingston, January 19. At left is chairman of the JSE, Curtis Martin. - Rudolph Brown/Photographer

Finance Minister Audley Shaw, hours before he would table new legislation in Parliament Tuesday, announced new powers for the central bank over Jamaican firms in a round of sweeping policy changes for the financial system that would also force Shaw into stronger stewardship over the treasury.

A proposed central treasury system will bring responsibility for treasury management functions under one agency, and establish a Treasury Single Account (TSA) to improve cash management.

"The government plans to consolidate all general government cash resources in the TSA," Shaw said.

But more fundamental to business, the finance minister laid out plans to increase scrutiny of businesses whose operations impinge in any way on financial institutions regulated by the BOJ.

To strengthen the financial system the government plans to pass an omnibus banking law that will allow for more effective supervision of financial conglomerates, by harmonising the prudential standards that apply to commercial banks, merchant banks and building societies, Shaw told financial bosses at a capital markets conference in Kingston.

The Bank of Jamaica Act will also be amended to establish the central bank as the authority responsible for overall financial stability, which will allow the BOJ to access data from parent and affiliate institutions of financial institutions under its direct supervision, including those not part of a conglomerate.

The BOJ's oversight is currently confined to deposit-taking institutions - commercial banks, merchant banks, building societies, and soon, credit unions - but the new legislation appears set to open up its reach to include securities dealers and insurance companies, as well as large corporations whose core operations are non-financial but nevertheless own financial assets.

It will also provide, Shaw said, a stronger basis for the BOJ to provide financial support to non-banks, if needed, to ensure financial system stability during periods of extreme volatility.

The central bank will be expected to set the criteria for providing liquidity support to primary dealers.

Shaw also told the conference that government will also reform the securities dealer sector to strengthen its ability to withstand shocks.

A major problem, he said, was that their balance sheets were facing both liquidity and maturity risks, and that their capital requirements were not as comprehensive as the International Monetary Fund's 2006 Financial Sector Assessment Programme (FSAP) suggests they should be.

At the JSE conference, he said, the securities dealers were at risk, but later in Parliament Shaw also said reforms, to be in place by June 2011, were also required for deposit-taking institutions to enhance "capital rules to address all market risks, including equity and interest rate risks", and strengthening of anti-money laundering measures.

Shaw did not connect the planned reforms for the securities sector to the new powers to be imbued in the central bank, nor did he spell out the implications for the Financial Services Commission (FSC), which regulates them.

But his proposals at the opening of the 5th Jamaica Stock Exchange Capital Markets and Investment Conference, appear to be pushing the central bank toward the role of 'single regulator' - an idea first mooted in 2007 by past governor Derick Latibeaudiere, who suggested that it was best to have one authority empowered to act to avert systemic failures.

Latibeaudiere's proposal, which he later backed off, would have required the FSC to operate as a unit of the BOJ, as its predecessor - The Securities Commission - did in the pre-financial sector meltdown period.

The BOJ, in the interim, pushed for conglomerates to unbundle their financial businesses from other operations, for easier monitoring of deposit-taking institutions, and Latibeaudiere, just before his departure in October 2009 began backing away from the sole regulator proposal and talking more about greater information sharing between the different agencies as a means of keeping tabs on the pulse of the financial system.