Jamaica: Productivity Summary Report 1972-2007 - It's expensive, we are producing less! 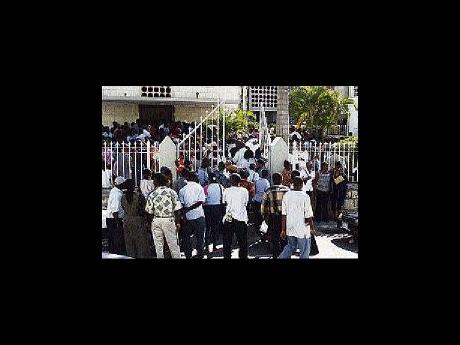 In this 2005 photo, hundreds of farm work applicants gather at the St Paul's United Church, in Montego Bay, St James, hoping to be selected for the programme.

We have observed that the output per worker has been falling in Jamaica during the period 1972-2007. We now turn to the issue of what has been happening to the labour cost of each unit of good or service produced over the same time period. This statistic is referred to as unit labour cost and is a measure of the competitiveness of locally produced goods and services. It estimates the real wage paid to workers for each unit of good or service they produce. If the output produced per worker declines while real wages increase or remain the same, the labour cost of producing each unit of output increases. If nothing else changes, each unit of output is now more expensive to produce and therefore less competitive. Ideally, increases in wage rates should be driven by increases in productivity (output produced per worker), so as to prevent inflationary pressure.

It might be argued that labour is just one of the inputs in the production process, however it must be noted that it is one of the largest expense of a company and therefore will have a great impact on production cost. Industries which are labour intensive, as are many in Jamaica, are very sensitive to movement in labour cost.

During the period covered by the Productivity Summary Report (1972-2007) unit-labour cost increased, on average, by 0.4 per cent per annum. This deterioration in competitiveness was driven by a decline in labour productivity and not by increases in real wages. In fact, real wages declined, on average, by 1.2 per cent per annum over the period. The fall in real wages was not sufficient to compensate for the fall in labour productivity. Therefore, this resulted in a loss in competitiveness.

Between 2003 and 2007, there was an annual reduction in unit-labour cost of 0.9 per cent. This resulted from a greater decline in real compensation to workers of 4.3 per cent per annum, relative to labour productivity, which declined by 1.8 per cent per annum

The period 1993-1997 saw the largest increase in unit-labour cost, 5.6 per cent annually. During this period, real compensation to workers increased by a similar amount while labour productivity remained constant.

In the mining and quarrying industry, unit-labour cost increased in only one of the seven five-year periods examined, i.e. 1993-1997. This was due to the wage rate increasing faster than the growth in labour productivity. For the full period 1972-2007, unit-labour cost declined by 2.6 per cent per annum.

In manufacturing, the story was a little different. Unit-labour cost increased in three of the seven five-year periods. The largest of 3.9 per cent per annum was in 1973-1977. This was as a result of increasing wage rates in the face of declining output per worker. For the full period of the report, unit-labour cost was relatively constant in the sector.

Given the declines in labour productivity in the construction and installation sector, it was no surprise that this sector had the most consistent increases in unit-labour cost. The periods 1973-1977 and 1983-1987 were the only two examined which showed a decline in the labour-unit cost. In both these periods, the improvements were driven by the wage rate falling faster than labour productivity. For the full period, 1972 - 2007 unit-labour cost increased by 0.7 per cent per annum in the sector.

In order for the country to improve its competitiveness, which is a precondition for sustained economic growth, the unit cost of labour has to be reduced. There are two ways of achieving this objective, either a reduction in the compensation to workers or an improvement in labour productivity. The first is not a very attractive option, as it implies a race to the bottom, with very little domestic demand and falling standards of living. The second option leads to a virtuous cycle - higher levels of output, increased wealth for workers, increased demand which calls for higher levels of output.

For the full text of the JPC's indicators report please visit www.npaw2009.com/indicators. The Jamaica Productivity Centre is the national organization responsible for promoting and facilitating productivity enhancement at the national, sectoral, industry and enterprise levels.