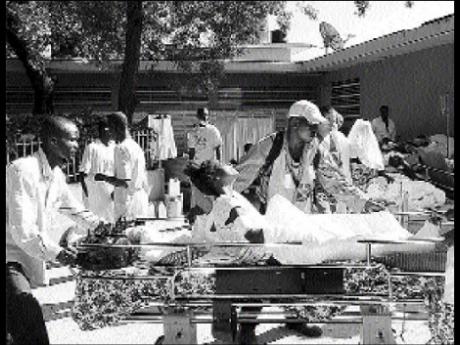 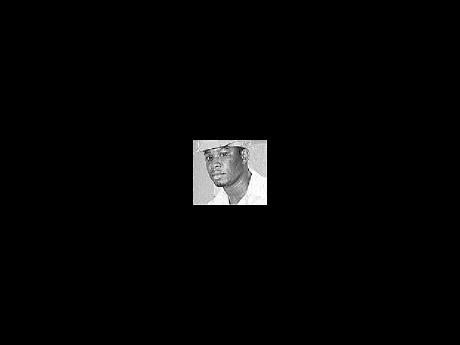 A woman writhes in agony as she is being wheeled to a hospital in Port-au-Prince, Haiti, yesterday. - Ian Allen/Photographer

Twenty-two-year-old Emmanuel Delimac wants to relocate to Jamaica. He wants the chance to study medicine so he can one day become a doctor and save lives.

Up until a few days ago, Emmanuel's interest was computer science. He was studying the discipline in a Haitian college but the catastrophic earthquake which ravaged Haiti changed his life.

Before the quake, he went about his daily business with both legs intact. He had his family as moral support and, despite the impoverished state of Haiti, Emmanuel led a normal life.

However, all that changed last Tuesday in the aftermath of the earthquake, which killed an estimated tens of thousands.

He lost four relatives - two nephews, one niece and a cousin - as their house caved in, entombing them. Emmanuel, who was in the house at the time, sustained a broken leg which got infected and had to be amputated.

"My leg was infected bad. I could not find any doctor to cure me and then the Jamaican doctor came ... . He cured me. I thank God for him. I thank him much," the Haitian said from his hospital bed.

The doctor Emmanuel speaks of is Carlos Wilson.

"He would have died if we hadn't removed his leg. It was very, very badly infected, very foul-smelling and there was no other option but to remove it to save his life," Wilson said.

But the story is incomplete without Aleck Dejean, a volunteer at the health facility where Emmanuel is a patient.

Aleck is a 23-year-old student who knows enough English to help doctors communicate with victims. However, he is more than a translator - he is a dear friend of Emmanuel.

"My friend would have died had the Jamaican doctors not been here," Aleck tells The Gleaner.

His voice then cracked. He paused and then slowly reached into his back pocket, took out his wallet and brandished a photograph of Stephanie Gilles, a 22-year-old.

Stephanie was Emmanuel's cousin; one of his four relatives who perished in the quake. Stephanie was also Aleck's girlfriend - the only one he says he has had in 11 years.

No one has been able to recover Stephanie's body from the ruins of the house. Like so many quake victims, she is buried in the rubble of her home and the possibility of a decent funeral is remote.

Aleck says he has not had time to think about how her death would affect his life.

"I have been trying to save my friend's life. We could not find someone to cure his leg," Aleck said.

But he couldn't stop talking about the love of his life. "April 7 would be 12 years," he muttered.

He then quickly placed the photo back in his wallet, held back the tears and walked towards Emmanuel's bed, where Wilson was administering follow-up treatment.

Wilson later told The Gleaner that the sentiments from Emmanuel moved him.

"To know that I was able to help a Haitian and that he could turn around and say thanks is a great feeling. We are here on a mission and when the Haitian people recognise our work, your heart gets soft inside. He was in so much pain and he was definitely at risk of losing his life. And to lose your leg and then say thank you for cutting off my leg, it means a lot," the Jamaican doctor says.

Wilson told The Gleaner that many of the earthquake victims have sustained cuts and broken bones, sometimes under those wounds.

"The biggest problem that we are facing now is infection. Many people are dying right now because of infected wounds that have not been treated. We have to find those persons with the infected wounds, get rid of the infection or else they will die," Wilson said.