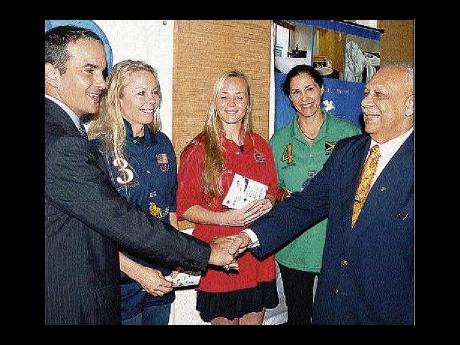 Jamaica has yet again found itself pioneering another initiative, with yesterday's launch of the ICWI Tri-Nation Ladies Polo Tournament, at the Pegasus hotel.

The tri-nation tournament is the offspring of the previous ICWI Polo Tournament, which was started in 1988 and held annually.

This new format is the first of its kind in this region as only Africa previously had a tri-nation series.

It is, however, not formally sanctioned by the Hurlingham Polo Association (HPA).

"We have such growing numbers of Jamaican players that we thought that this was an ideal opportunity for us to try a different format ... 1988 was the first time we played some rendition of the ladies tournament and now we really do have a tournament," he added.

The tournament, which will be held over four days, will see the playing of five games. The first game, which was contested yesterday, saw Jamaica up against the United Kingdom (UK) at the Kingston Polo Club.

The United States of America (USA) team will bow into action tomorrow when they tackle their UK counterparts, before going up against the Jamaican team on Saturday at the St Ann Polo Club.

The tournament will culminate on Sunday with the final. Another team will play in a battle-of-the-sexes match against some up and coming male players.

Jamaica's captain, Lesley-Ann Masterton Fong Yee, is very proud that the country will be hosting the tournament.

Masterton said: "Women's polo in Jamaica, small as we are, has led the world over the years in having the first all-professional tournament that went on for many years and was responsible for women's polo becoming unified around the world. Now we want to be the first again to step up and try and get the national teams to play each other in a test match situation."

"I want to try and take this format and this model and try and implement it in South Carolina," said USA's captain Karen Reese. The UK's captain, Lucy Taylor, is surprised that the UK or the USA were not the ones to have taken the initiative.

"It is a great idea and really should have happened earlier," said Taylor. "You would have expected America of England to have done this but they haven't, it is Jamaica that has done it."