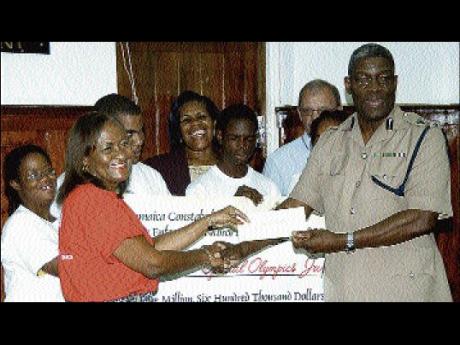 Special Olympics Jamaica (SOJ) was yesterday the beneficiary of $1.6m from the Jamaica Constabulary Force (JCF), as they begun preparations for the 2011 Special Olympics World Summer Games, which will be held in Athens, Greece.

The contribution, which was raised via the JCF's SOJ biannual Law Enforcement Torch Run, represents an increase of $600,000 over the amount which was handed over two years ago ahead of the Games in Shanghai, China.

"This is the best year for us despite the economic conditions. So we must congratulate JCF for a job well done," said SOJ's executive director, Lorna Bell, after collecting the donation from acting Commissioner of Police, Owen Ellington, at a press conference yesterday.

"The police, who have been on-board with us for over 25 years, is the backbone of Special Olympics, not only in Jamaica, but worldwide where law enforcement officers hold similar torch runs.

"We are grateful for their contribution and now urge corporate Jamaica to join in and help us ensure that Jamaica is well represented at the Games next year," she added.

Ellington, in handing over the cheque, said his organisation was proud to continue its support of SOJ's ventures and praised the men and women of the JCF who contributed to the efforts.

"We are very happy to hand over the funds raised to assist Special Olympics Jamaica in their preparations. I want to thank every member of the force who contributed to raising the funds, and the public who played their part," said Ellington.

He added: "I wish the team well and hope that you will continue to make the nation proud."

The Law Enforcement Torch Run started in February last year and ended in December. It was taken through 14 parishes and 19 police geographical divisions.

"It was good, albeit we did not reach the target that we had originally set of $2 million. But having said that, the officers of the force really worked hard, especially Inspector Sheryl Brown and her team," said Senior Superintendent Iris McCalla-Gordon, of the Community Safety and Security branch of the JCF.

McCalla-Gordon had responsibility for organising the torch run.

Meanwhile, it was also announced at the press conference that four athletes, ahead of delegation/head coach, and parent will travel to San Juan, Puerto Rico next month as Jamaica's representatives to the second annual Special Olympics Latin America Games.

The athletes, who will compete in aquatics, include Andrew Bartholomew, Nicholas McBean, Crystal Knight, Racquel Lovindeer, while head of delegation/head coach duties will be performed by Beulah Bartholomew. The parent is Yvonne McBean.