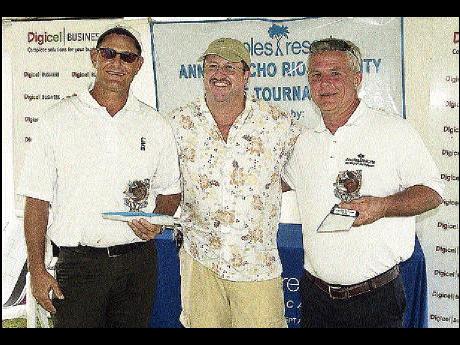 Randy Russell, senior vice-president of marketing, Couples Resorts, is flanked by winners of the Open category of the Couples Tower Isle Charity Golf Tournament, Greg Wright (left) and Warren Cersley, shortly after he presented them with their prizes. - photo by Carl Gilchrist

The pair finished ahead of Robert Smith and Cary Nattoo, with Anthony Ziadie and Michael Hall ending up third.

In the mixed category, Jeff and Wendy Lock won ahead of Michelle Gabay and Wayne Sutherland.

The top two finishers in the Open and mixed categories received accommodation at Couples resorts as prizes, in addition to trophies.

The effort this year raised some $1.2 million, which, although traditionally used to fund charity events in St Mary, will this year also aid the relief effort in hurricane-ravaged Haiti.

Couples Chief Executive Officer, Glenn Lawrence, says $400,000 from this total, in addition to a matching figure from Couples Resorts for a total of $800,000, will be donated to the Haiti effort.

Also to benefit from the event this year are the Port Maria Hospital; Animal House, a stray animal sanctuary operated by Maureen Sheridan; and Three Hills Primary and Hamilton Mount Basic schools, all in St Mary.