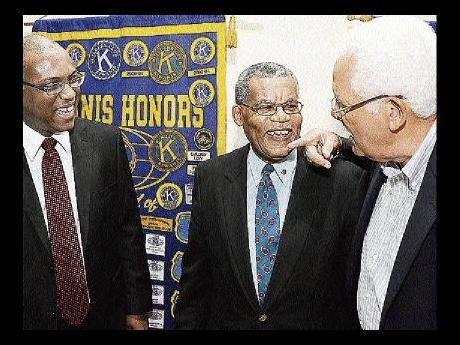 Guest speaker Ian Boyne (left) chats with Patrick Anderson (centre), president of the Kiwanis Club of Kingston, and past Governor Carlton Levy at the club's media appreciation luncheon at the Hilton Kingston hotel in New Kingston on Tuesday. - Rudolph Brown/Photographer

Talk-show host Ian Boyne says Jamaicans should not be offended by groups that promote gay rights.

"Whatever our views on homosexuality, I think we should agree that those who hold to a homosexual lifestyle should have the right to say what they want to say.

"I could never do a 'Religious Hard Talk' (one of his two TV shows) with a group of homosexuals whose faces are not blurred, and that says something about our society," Boyne, a Sunday Gleaner columnist, said.

In a quick response, head of Power of Faith Ministries, the Reverend Delford Davis, questioned, "Is it that they (homosexuals) want to say 'permit us to not just say but live out our life and (you should) be tolerant to the point where we say nothing?"

While conceding that homo-sexuals are entitled to free speech, Davis said the Church and society must condemn values it deems "immoral" and which infringe on the right of others.

Tolerance on both sides

His colleague, the Reverend Peter Garth, while making it clear that Christians should not be violent towards gays, urged homosexuals to be tolerant as well.

Garth, president of the Associated Gospel Assemblies, also argued that it depended on people's interpretation of being "offended" by homosexuality.

"I am not going to be offended to the point where I use something to hit them ... but to talk about having a march when you know how Jamaicans are?" he said.

However, addressing the Kiwanis Club of Kingston on Tuesday, Boyne said a "bigotry index" is now being used to judge countries around the world and the fact that many Jamaicans were "very intolerant, divisive and tribalised" society could scare away foreign investors.

"If we continue to be pictured abroad (and accurately so) as a society that is very intolerant, we are not going to be able to attract the foreign capital that we need," Boyne added.