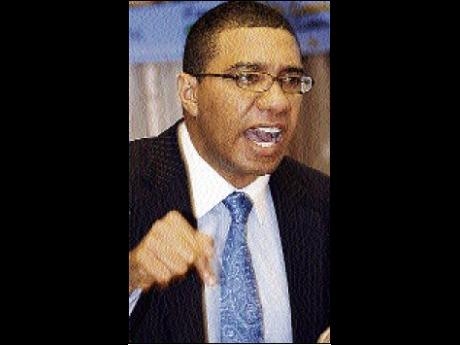 Andrew Holness ... The new thrust of the Government is to achieve universal secondary education. - File Photos

Education Minister Andrew Holness says his ministry is to expand the concept of literacy beyond basic writing, reading, and comprehension skills.

Holness' comments were made while providing an update on his ministry's activities during a Gleaner Editors' Forum at the newspaper's North Street offices Tuesday.

He said the four new areas being introduced - behavioural management, as well as financial, technological, and media literacy - comprised the ministry's new approach to literacy.

"The basic literacy - we're dealing from ages three to nine - but from nine onwards into high school, we want our kids to have these multiple literacies to function in society. That is going to be the focus of the Ministry of Education this year," said Holness.

He said his ministry would continue to expand the educational infrastructure, noting its goal was to achieve universal secondary education.

"In my last sectoral presentation, I dealt with the fact that we have achieved, based on the UN (United Nations) goals, universal primary education. The new thrust of the Government now is to achieve universal secondary education," Holness said.

Under universal secondary education, the Government is aiming to have 100 per cent students, aged 16 and over, attached to a secondary-level institution.

Concerning the issue of violence in schools, Holness said his ministry was intent on passing safe-school legislation this year, noting that the framework had already been put in place.

"That safe-school legislation will deal with how the administration of the school deals with safety and security issues. The guidelines are already out there (and) all the schools are already following it. We just need to couch it in legal terms," he noted.

Holness said the legislation will also deal with peripheral issues such as vending, and student behaviour in public spaces such as transit areas and shopping zones.

"The roots of gangs stretch deep into schools, and what we're going to be asking is for cooperation. It has already started between the schools and their police commanders in the area they exist, to point out where the associations are, so the police can come in and do what they call diversionary tactics. We're addressing those issues," Holness said.