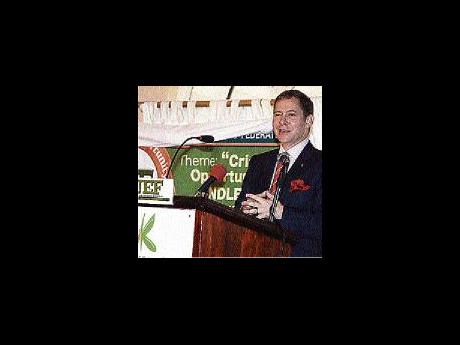 Government needs to do more than a debt exchange to right its fiscal accounts, said Bruce Bowen, president and chief executive officer of Scotia Group Jamaica, whose formula for growth includes revisions to the tax system, smaller government and bigger invest-ments in infrastructure.

"So it is not just purely a cost reduction but a realignment of the Government," he said Wednesday.

Bowen also told Jamaican employers that were he to justify the commercial benefit of the J$700-billion Jamaica Debt Ex-change (JDX) offer, as clients are asking, it would be on the basis of the promise by rating agencies to increase the country's credit score at successful take-up.

The banking group is yet to declare outright whether it will participate fully in the offer, though Bowen has said he supports the idea of what the JDX is meant to accomplish.

"The debt exchange is not the end of a road; it is the beginning of a long journey," Bowen said in a speech to the Jamaica Employers' Federation's most recent CEO Breakfast Wednesday.

"It is something that is bringing breathing room to the country."

The banking group holds more than $30 billion of GOJ securities according to central bank data, but its subsidiary Scotia DBG also manages about $100 billion of investor funds.

Scotia DBG told clients this week that the JDX would cut, on average, 610 basis points off the coupons on their GOJ domestic bondholdings.

Some 350 bonds are being recalled and will be replaced by 24 new tenors priced at an average of 12 per cent on Jamaican-dollar instruments, and 7.0 per cent on US-dollar issues.

The lower coupons and longer tenures, extending up to 30 years, are expected to save Government more than $40 billion annually.

Bondholders have until January 26 to take up the offer.

Bowen said his bank has decided to support the Government because the current fiscal situation is not sustainable.

"The alternative of not doing anything is much worse than the option now facing us," he said.

"I think the best commercial argument to participate, in addition to looking at the alternatives, is recognising that all three of the rating agencies have indicated that successful completion of the transaction will lead to an increase in ratings."

Bowen insists, however, that the savings from the JDX would not be enough to turn Jamaica around and would also require a new approach to efficient tax collection - starting with a more broad-based consump-tion tax structure.

"In the short run, that is the best way to fairly spread taxes across the economy, while in the meanwhile investing in the assessment and the enforcement infrastructure to collect the rest of the taxes which are owed and not being paid," he said.