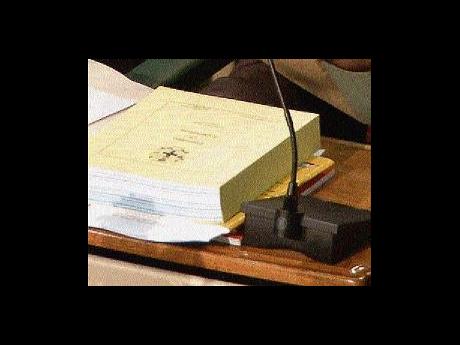 A Budget document sits on a desk in the House of Parliament. - File

Three days into the offer for the Jamaica Debt Exchange (JDX), Finance Minister Audley Shaw was ebul-lient about the response from bondholders.

"The response has been remark-able," he said Wednesday night while addressing the monthly Mayberry Investor Forum in Kingston.

"I got a call from one of the big players today (who) said to me that he is satisfied that to date, the response level is likely to be in the region of 95 per cent. We expect that by the end of the process those bonds should be 100 per cent."

The minister told the forum that bondholders who have interest-bearing coupons that range from 16 to 28 per cent are asked to exchange their instruments for instruments that average 12.25 per cent.

"We have cut down the number of instruments, types of products from 350 down to 24 - it was too confusing," he said.

The new bonds will be issued electronically, replacing the current system of paper notes, but it requires legislative changes that Shaw said were already passed in the Lower House and would be debated in the Senate today.

"In the debt exchange, some of the interest that would have been due in April, we are going to pay it early in February, at the same time we have the redemption of those notes," he said.

The JDX is expected to save Government $40 billion in annual interest payments on the domestic portion of the national debt, but Shaw said it may not be enough to reel in the fiscal deficit right away because of obligations relating to loss-making state assets that are up for sale.

The fiscal deficit is now estimated at 10 per cent of GDP.

There will be a lot of bills to pay relating to Air Jamaica, he said, which was previously announced as likely to cost as much as US$300 million (J$27 billion) in job redundancies and other divestment-related charges.

But the finance minister also assured the forum that the national Budget would see no increases in 2010/11.

"No growth whatsoever in the Budget - and if we didn't have the Air Jamaica obligations of $27 billion, it would be almost that amount less."