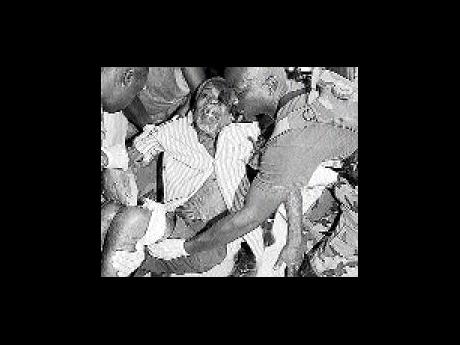 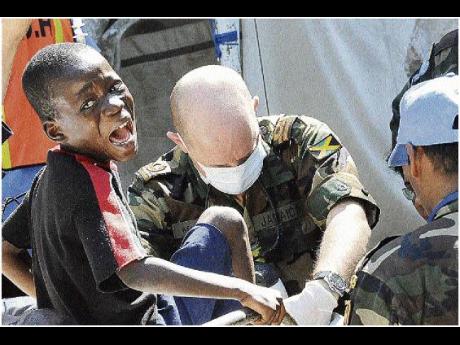 Military personnel assist an injured Haitian who was hurt in the magnitude 7.0 earthquake which ravaged the Caribbean nation last week. Thousands of troops have poured in from various countries, including Jamaica, offering much-needed muscle to the rescue-and-relief effort. - Ian Allen/Photographer

Haitians Injured by the devastating earthquake in their homeland are already showing up in Jamaica.

The Ministry of Health's director of emergency, disaster management and special services, Dr Marion Bullock-DuCasse, disclosed yesterday at a monthly press briefing during the Ministry of Health that two individuals had arrived in the island with family members and were treated successfully at hospital and released.

She added that the hospitals would remain on standby to aid Haitians.

"It is anticipated that even in terms of dealing with the urgent emergency medical care for injuries caused by the earthquake, it will take the team at least a six-month period," said Bullock-DuCasse.

Jamaica has deployed a 26-member team to Haiti, which works on a seven to 10-day shift. That team has so far conducted 56 operations and delivered 10 babies, including three who were premature.

Another team of medical personnel is expected to leave the island today to replace half the team, which is working alongside other medical units from other CARICOM countries.

In the meantime, Bullock-DuCasse said the medical team in Jamaica continues to be on alert for the arrival of Haitians.

"We have already briefed our team ... they have been provided with the supplies they will use in terms of their screening and treatment, so our team is on alert and awaiting any arrival," she said.

Jamaica Defence Force Captain Johnathan Wemyss-Gorman administering first aid to a Haitian boy who was hurt in the recent earthquake which devastated the capital, Port-au-Prince, and other towns, killing tens of thousands. - Ian Allen/Photographer