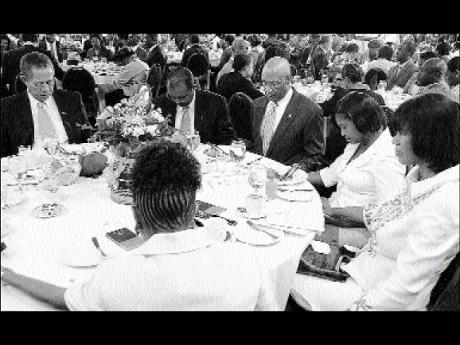 Declaring that the society had lost its moral and spiritual direction, president of the Caribbean Graduate School of Theology, Dr Lascelles Newman, has warned that Jamaica would perish if it does not change course.

Speaking at the annual National Leadership Prayer Breakfast yesterday, Newman predicted that there would be "disastrous consequences" if things continued the way they were.

"Jamaica is no longer at a crossroads, it is going down the wrong moral and spiritual road," he said, citing the rising crime rate and violence in schools as examples.

"None of us can wash our hands and proclaim our innocence ... . All of us must accept responsibility," he added.

Noting that now was not the time to be assigning blame, Newman said Jamaica needed fundamental changes in order to create a more peaceful, law-abiding and caring society.

However, the Caribbean Graduate School of Theology president said the changes would not come about if the nation was divided and confused about moral issues which should govern public and private conduct.

The national prayer breakfast, first held in January 1981, was organised by the Church to promote peace and unity in the society following the bloody general election of the previous year.