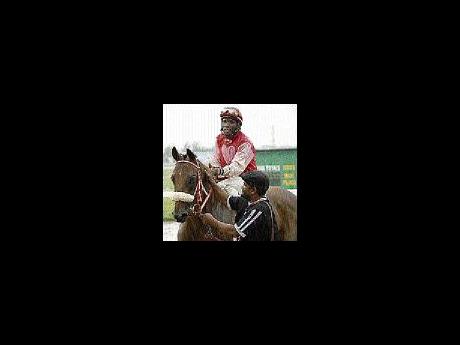 Balloting for the 2009 Horse of the Year and other awards will be concluded by the 19-member Horse of the Year Committee tomorrow and indications are that the crack sprinter AHWHOFAH will win most awards for her owner Winston Kong.

The list of nominees for non-statistical awards were forwarded to members of the Horse of the Year Committee a week ago and these will be handed in to the CTL racing secretary, Denzil Miller Jr tomorrow for confirmation.

The 21st annual None Such/Horse of the Year dinner will be held next month at a venue to be announced. The winners of the various categories will be known on the night of the dinner.

As a four-year-old in 2009, the Wayne DaCosta-trained AHWHOFAH won five grade one races (from 10 starts) including the valuable Caribbean Sprint Championship on November 14 at Caymanas Park.

She earned $4.6 million to finish fourth on the list of leading stakes winners for the season, behind the classic-winning three-year-olds HE'S REALLY OK ($5.7m), BRUCEONTHELOOSE ($5.4m) and SAINT CECELIA ($5.2m).

AHWHOFAH is almost certain to be voted champion sprinter for a second straight year, as well as champion older horse (4-y-o and up), champion four-year-old and up sprinter (female and overall) and best local-bred horse.

The Percy Hussey-trained COLONEL WALES, who was an impressive winner of the Supreme Ventures Jamaica 2-Y-O Stakes over 1600 metres last Boxing Day, looks a cinch for the champion two-year-old award, but it could be close going in the champion three-year-old category among the trio of UBA Derby winner HE'S REALLY OK, Guineas, Oaks and Gold Cop heroine SAINT CECELIA and, of course, BRUCEONTHELOOSE, who failed by a short head to win the Triple Crown.

Although 'BRUCE' was shipped off to Trinidad (in July) where he proceeded to dominate racing in that country, winning the Derby by the proverbial city block, he could find favour among members of the committee for this particular award. After all, he beat both SAINT CECELIA and HE'S REALLY OK in the season's final classic, the RJR St Leger on July 11, and it would be fair to say that the grey colt from the stables of Philip Feanny was the most consistent three-year-old.

Dwight Chen's American filly HONEYOFALADY, by virtue of having won seven races up to grade one level, looks a shoo-in for the champion foreign-bred horse. Ryan Darby, who finished fifth in the trainers' standings with 30 wins (basically claimers), is favoured to win the most improved trainer award, while the award for most improved rider looks a toss-up between Paul 'Country' Francis and the Panamanian, Dick Cardenas.