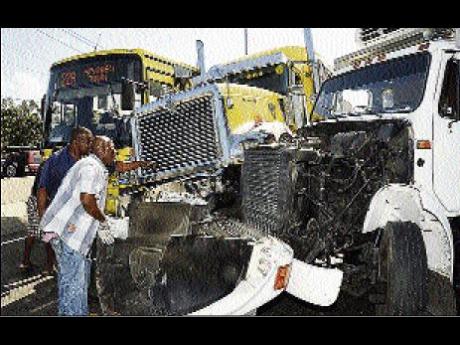 A three-vehicle collision on Marcus Garvey Drive in Kingston yesterday involving a JUTC bus, a tanker and a truck. Several passengers were taken to hospital with minor injuries. - Norman Grindley /Chief Photographer

JAMAICA WAS miraculously spared another awful catastrophe yesterday after a tanker filled with oil ploughed into a Jamaica Urban Transit Company (JUTC) bus filled with passengers and a large delivery truck along Marcus Garvey Drive.

There were no fatalities but several JUTC passengers were injured.

Piercing screams reverberated from the 22A JUTC bus heading to Spanish Town from downtown Kingston in the aftermath of the impact.

The sounds of terror echoed the fear the passengers said they felt when they realised that the highly flammable tanker could have exploded.

Frightened passengers, assisted by others, scrambled through air vents in the roof of the bus, as well as some of the windows, when the Gleaner team arrived on the scene.

Persons claiming to be eyewitnesses from nearby Greenwich Town, as well as employees from companies in the area, said the JUTC bus had stopped to allow the delivery truck to reverse into Industrial Sales Limited when the oil tanker collided into both vehicles.

Jessica, a JUTC passenger, was on her way to Spanish Town to take her ailing grandmother to hospital, but she did not make it.

She told The Gleaner that she was in pain, having sustained stomach and hand injuries, but that did not prevent her from escaping through one of the windows.

The extent of Jessica's injuries was unclear.

A few metres away, tears flowed freely from two women who were seated in a marked police vehicle preparing to take them to hospital.

Quivering and barely able to speak, the women gave their names as Donna Dixon and Michelle.

Dixon told The Gleaner that she received a severe blow to the head as she was seated on the side of the bus which received the full impact of the hit from the oil tanker.

The tanker had reportedly just loaded up at the nearby Petrojam facility on Marcus Garvey Drive.

Two schoolboys, too frightened to speak, were seated beside them.

JUTC personnel took the names of the injured passengers.

The police were out in their numbers manning the area, which was choked with traffic, while fire personnel took precautionary measures as others toiled to extricate the three vehicles, the extensively damaged fronts still wrapped around each other.

Up to midday, the side of the Marcus Garvey Drive dual carriageway leading to Three Miles was blocked.