The Guardian's a safe bet 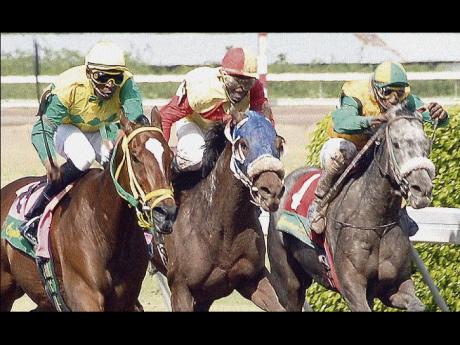 The three-year-old campaign leading up to the season's first classics, the 1000 and 2000 Guineas on April 5, commences today at Caymanas Park with the Eight Thirty Sprint over the straight five course for native bred maiden three-year-old fillies.

Champion Betting, who co-sponsored the claiming series from July to December last year to the tune of $3 million, has discontinued its sponsorship apparently over the rights fee issue between the bookmakers and CTL. The promoters are asking the bookmakers to pay increased rights fee of 3-1/2 per cent - up from one per cent, this representing a 250 per cent increase.

Members of the United Bookmakers Association say they are paying the 3-1/2 per cent under protest.

The Eight Thirty Sprint has attracted a maximum field of 16, including the well-forward debutante MISS ANGELINE to be ridden by title-chasing jockey Paul Francis for trainer Percy Hussey and his mom, Ruth - the newly crowned champion owner.

MISS ANGELINE, who is named after Mrs Hussey's daughter Angeline, has caught the eye at exercise in preparation for the race and could get off the mark immediately. However, the Traditional-All For Pleasure offspring will have the more experienced trio of ALEXIS, HERA and TOPLESS ANGEL to contend with and this one could go down to the wire.

Despite the sound claims of MISS ANGELINE and ALEXIS, who have good speed and will love the distance, preference is for the Anthony Nunes-trained HERA, who has been administered Lasix for the first time since finishing a good second to SOCCER PARTY over 1200 metres on Saturday, January 2.

Wayne DaCosta's THE GUARDIAN, who has been a model of consistency, gets the nod over old rival FOREVER MINE and QUICK AND GRAY in the St Catherine Cup, principal feature in which nine fit horses have been declared.

THE GUARDIAN, to be ridden by champion jockey Omar Walker, ran well to finish second to his brilliant stable-companion AHWHOFAH in the Caribbean Sprint Championship over 1200 metres on November 14 when having FOREVER MINE behind in third.

Today, FOREVER MINE renews rivalry on better terms and will have a lot of supporters. But with the fleet-footed MR. SKILL sure to set a blistering pace to the last furlong, this should set it up nicely for the stretch-running THE GUARDIAN, who has looked sharp in his preparation for the race. FOREVER MINE looks a big danger.

I also like RICKAYBA to catch COCK ROBIN and NASATOL in the CTL Claiming Series race; MY BREDREN in the second; PATARA in the fifth; and ALIAS MR. CAT to repeat in the seventh.