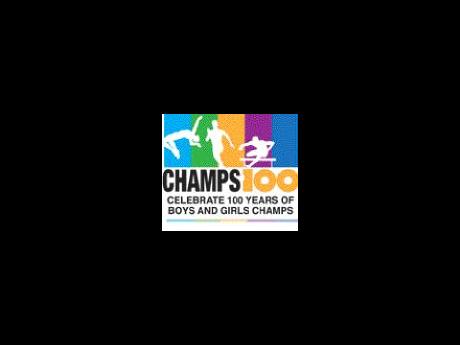 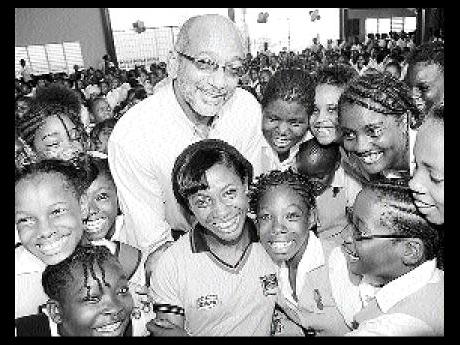 Douglas Orane (centre), chairman and chief executive officer of GraceKennedy, the title sponsor of Boys and Girls' Championships, and Shelly-Ann Fraser, Olympic and world 100m champion, are surrounded by students of Wolmer's Girls during a ceremony to honour Fraser at the school last year. - File

Athletes, who will this year, represent schools that have played significant roles in the rich and storied history of the Boys and Girls' Athletics Champion-ships will be under great pressure to perform at the highest levels as the championships celebrates 100 years.

But none this year will perhaps face greater pressure than the athletes at Wolmer's Girls.

Before the advent of Girls' Championships in 1957, Wolmer's Boys had won 10 championships including the very first in 1910. Their last was in 1956. Wolmer's Girls, too, while having never won the Girls' Championships have produced several outstanding athletes, among them Nikole Mitchell, the 1992 World Junior 100 metres champion, who also represented Jamaica at the 1996 Olympics, and most recently Shelly-Ann Fraser, world and Olympic 100-metre champion.

In recent years, Wolmer's Boys and Girls have consistently produced strong teams for the now joined GraceKennedy Boys and Girls' Athletics Championships. Both schools have finished in the top five for the last two years.

This year as Champs rushes forward to its 100th anniversary, the girls' school finds itself under an even brighter spotlight as Coleen Montaque, the principal of Wolmer's Girls is coordinating the events leading up to the historic renewal and the event itself. This, girls' coach Michael Carr says, has put the onus on the team to do that much better.

"That is what I have been trying to instil in the athletes, the significance of this 100th anniversary of Champs. I am trying to make them see how prestigious it is to go and perform on this particular stage. And then with our principal, being the principal in charge of Champs, we are even forced to try and do better so she can look good," Carr says with a wry smile.

But that's not all. Fraser, in the last two years has set the bar high, very high, winning World Cham-pionship and Olympic gold. She is also the new holder of the national record in the 100 metres at 10.73 seconds, eclipsing the 10.74 set by another legend, Merlene Ottey, 14 years ago.

"With what Shelly has done, I am trying to make them realise how high the bar is and where they have to go to keep it going because every time they touch the track, they have her in front of them. So, they have somebody to chase. She is leading them and they couldn't want a better leader," Carr says.

Fraser has been paying periodic visits to the school, the last time being last week, chatting with the athletes, motivating them to rise to the standard she has set. But while Carr is unable to say how much her talks have helped, he believes that some of what she has been telling them has been taking hold.

"I am hoping some of it rubs off. Some of the girls who were teammates with her are still there, so they are more inspired than probably some of the new ones because since she was with them on the team and where she has reached, it has definitely inspired some of them to say, 'Shelly did it, let us try'."