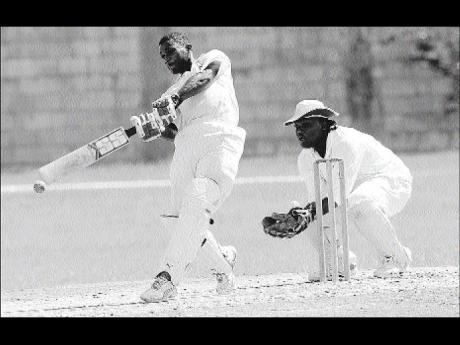 Lime's Horace Miller hitting out during his 121 not out against Jamaica Broilers in their Business House one-day cricket final at Kensington Park on Sunday, while wicketkeeper Peter Caballero looks on. - Ricardo Makyn/Staff Photographer

They thus prevented Broilers from making a clean sweep of the four competitions run by the Business House Cricket Association. Broilers had previously won the Digicel 20/20 final against Jamalco along with the Best Dressed 30-over and St Ann Jamaica Bauxite 35-over KO finals, beating Lime in both.

Electing to bat on a perfect strip, Lime owed their victory to an unbroken fourth-wicket partnership of 171 between Miller, 121 not out (11 fours, three sixes) and former Jamaica and West Indies Under-19 player Andre McCarthy, who slammed an unbeaten 91, including six fours and five sixes off 56 balls.

Opener Ryan Francis made 35 as national player Andre Russell took two for 70 and Robert Turner one for 46.

When Broilers replied, Turner and Jamaica player Keith Hibbert posted 30 runs off the first two overs with some lusty hitting before Hibbert was caught at mid-on 14 (one six, two fours).

Turner was caught for 27 (six fours) and he was followed by Wayne Morgan (15) and Andre Russell, run out for five at 67 for four in the seventh over.

Despite fighting knocks from Noel Officer (50), Marinaro Dixon (38) and last man Nicoy Lindo (25 not out), Broilers were simply left with too much to do. Leg-spinner Damion Jacobs, the Melbourne all-rounder, took three for 29 and McCarthy, two for 41.

Despite playing at home, Caribbean Classic trailed their opponents for most of the way and were behind by 29 points early in the last 100 points. However, they fought back strongly and in a ding-dong tussle over the final 20 points, won 300-298 in a nail-biting finish.

Caribbean Classic lead the standings with 32 points from eight matches - seven clear of closest rivals Eagle View, who defeated Masterpiece 300-294 in an away match in Old Harbour.

Defending champions Fort International. and Eradication are joint third with 21 points from eight matches after both emerged victorious last Sunday.

The competition continues tomorrow with play in the ninth round starting at 11:30 a.m.

The recent Wray & Nephew skittles champions Eagles lead the standings in the Henkel-sponsored Pattex Cup skittles competition, having recorded their third win from as many matches on Sunday.

In their first two matches, Eagles humbled the defending champions Eastern All-Stars 8-3 to start the competition on a winning note, then whipped Mystic 8-3 on January 10.

In an earlier match, Dragon defeated Meadowvale 8-2, but Meadowvale's Portmore rivals The Dip drew their first match 5-5 against Olympic Strikers. However, The Dip lost 7-4 to Willies Strikers in their second match on Sunday in Spanish Town.

The competition continues tomorrow with the following matches.

Meadowvale vs Rowe's Strikers and Starliner vs Eastern All-Stars, both at Starliner Skittles Club, 113 Waltham Park Road; Dragon vs Mystix, Willies vs House of Peace, both at Willies, Three Miles Plaza; Mister C vs Olympic and Mercury vs The Dip, both at Mister C Skittles Club, Brunswick Avenue, Spanish Town.

Brown on a roll

Junior bridge player Walter Brown (son of veteran bridge player and banker Balmain Brown) is the talk of the bridge world this week as he secured his third tournament win against senior players when he teamed with journeyman Winston 'Smithy' Smith to win Wednesday night's leg of the year long event for the Dr David Levy Trophy. The pair recorded a remarkable 67.46% round to defeat perennial favourites Rex James and Judy Ziadie (62.70%) into second and multiple national representative Karl Lee and Wayne Chai Chong (59.52%) 3rd. This makes Walter Brown the winningest of the Juniors.

Monday night's leg of the Horace Payne Memorial Trophy was won by James and Ziadie with a 59.72% score. Second was Audley Astwood and Winston Chin You (55.56%) and third JBA Secretary Valerie Marshall playing with Richard Phillips also one of the coaches of the Junior team.

Leaders Portsmouth is caught in a big clash with Albion in their second match of the second round of The Captain's Bakery St Catherine FA Major League this afternoon at the Passagefort playing field at 3.

Portsmouth lead the league on 22 points, and will want to continue their eight-game unbeaten run. Albion who go into the game on a two-match losing streak are one of two teams which have beaten a rampant Portsmouth this season. Portsmouth turned back one of them, Flamingo, with a 1-0 last Saturday at the Passagefort playing field. In other games, Black Lions face Cumberland at Irish Pen, second-place DB Basovak (18) welcome Rodwood at Homestead, and De la Vega United host Flamingo at De la Vega football field. All games begin at 3 p.m.

Adams, who is away with the Jamaica Senior Cricket team and Logie were unavoidably absent from the function. However, Simpson made it all the way from St Elizabeth to collect his award.

Simpson, the president of the Uprising Cricket League, had been at the forefront of that league for over 13 years. Five junior players from the Portmore League who have represented Jamaica and the West Indies from the U-15 to the U-19 level were also honoured. They are Ramone Senior, Vander Rowe, Delbert Gayle, Mikhail Francis and Akeem Dwyer. Basil Bryan, a former consul general of Jamaica to New York was the guest speaker.

At the function, the top players and teams in the Wray and Nephew White Overproof Rum senior cricket league were presented with awards. Andrew Price, marketing manager of Wray and Nephew Limited, handed over trophies to members of the victorious Colours International team for the Senior League. Susan Wilson-Wong, sales and development manager at Nestlé Jamaica Limited, presented awards to players from the victorious Portsmouth team for the Milo U-15 title.

Ginger Ridge captured the Insport/St Catherine Primary Netball two-day rally after a 5-3 victory over Greater Portmore in the final at the G.C. Foster College on Friday, January 15. On their way to the final, Ginger Ridge whipped Glen Hope 8-0 in the quarter-finals, they then clipped Waterford 4-3 in a hotly contested semi-final. Greater Portmore beat Naggo Head 6-4 in the quarter-finals and edged Ascot 7-6 in semi-final play. Waterford placed third with a close 7-6 win over Ascot. Ginger Ridge walked away with two titles. Kimoya Simms was named Most Valuable Player while the most outstanding player award went to Patrine McDonald. Meanwhile, Tredagar Park topped the all-age section amassing 10 points, just ahead of Linstead (nine), and Mount Moreland (six).