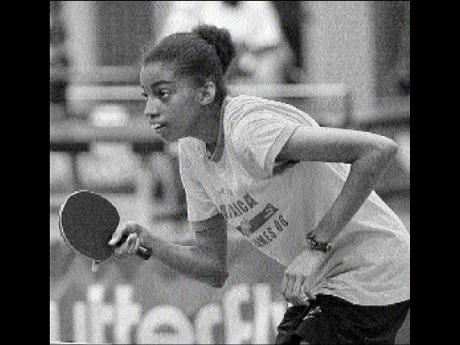 Jamaica's table tennis star, Yvonne Foster, has been the top female player in the island for the past five years.

Although just 16 years old she has been crowned female table tennis champion for the past five consecutive years.

She had what can be described as a 'love at first sight' experience with the game at the age of six and has been playing it ever since.

"My mother and I were walking in the community and we saw them playing table tennis over by the community centre and Sir G (Clive Grossett, her coach) invited me to come and play and from there I started. "

The Meadowbrook High School student has also experienced success at the regional level. Last year she won a silver medal in the Caribbean Junior Table Tennis Championship, which was held in St Kitts. Her greatest achievement to date however was her capture of the Caribbean Under-21 women's title in 2008. She defeated Trinidad and Tobago's Ashley Quashie 11-8, 12-10, 11-7 to walk away with the title. She, unfortunately, did not get to defend her title last year due to the administration's inability to fund the team's participation in the championship.

"Last year was a good year for me even though I did not get to go to the Caribbean Championship," said Foster. "I really wanted to go but we didn't get a chance to because of lack of funds. Apart from that I was glad to win my fifth consecutive national women's championship title," she added.

Foster attributes her local dominance to a rigid training regime, which sees her training from 4-7 p.m. on Wednesdays and Thursdays and 9 a.m. to 12 p.m. on Saturdays.

Her success in the physically demanding sport is even more remarkable as she has scoliosis, a disorder that causes an abnormal curvature of the spine, or backbone. This sometimes causes her to feel back pains while playing.

Despite her great love for the sport Foster does not see herself going beyond the Common-wealth Games level.

Foster, who is currently preparing for the March staging of the Caribbean Junior Table Tennis Championship to be held in Puerto Rico, does not believe the sport is currently getting the support it deserves in Jamaica.

"From what I have heard, it (table tennis) used to be more popular but the support has not been there since I have started to play. I just want people to sponsor the game and I would like to see a lot more youngsters coming out to play the sport."