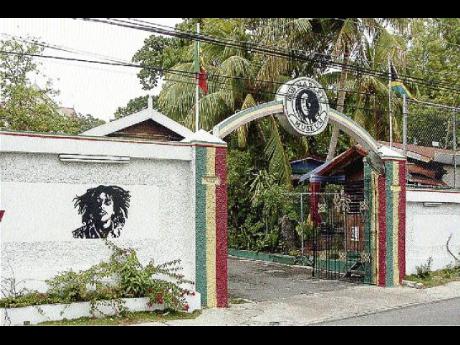 As we near the end of our series on the homes of the honourable in Jamaica, we visit Bob Marley's home. More specifically, we visit his three homes in Jamaica - Nine Mile, St Ann; Trench Town, St Andrew; and 56 Hope Road, St Andrew. Then there is also the year he spent in London, after the attempt on his life just before the 1977 'Smile Jamaica' concert and, of course, he died in Miami, USA. Some of the homes are well known - Nine Mile, where Marley is buried, as well as 56 Hope Road have official tours. Fortunately, though, we can go one better than seeing the places where the Gong lived. We can hear what he thought of them and their influence in his music.

Chances are (to misuse a Marley title), many a Jamaican have been to Nine Mile only in the night when a Marley celebration concert has been held there. On the other hand, when The Sunday Gleaner went to the community high in the hills of St Ann, earlier this month, there was a steady flow of designated tourist buses, as well as the odd private car, laden with tourists eager to see the first and final home of the Gong.

The 'Bob Marley Foundation' legend is outlined in red, green and gold on a stone wall just before one reaches the home on the right, going into Nine Mile from the much more well-used St Ann's Bay end approach. The surface of a water tank has been transformed into a steel canvas for huge, rich-hued drawings of Emperor Haile Selassie and Empress Menen, as well as a collage that has the name of Jamaica's most famous band.

Marley's home itself has been, naturally, transformed. A high wall, which runs about 80 metres along the steep slope which is the major descent through Nine Mile, borders the property, though from the restaurant on the other side of the road most of Marley's home is visible. His music, which is played continuously, is also audible.

Bob Marley was born in Nine Mile, St Ann, on Tuesday, February 6, 1945. In Catch a Fire: The Life of Bob Marley, Timothy White records that his mother Cedella went into labour on Sunday, February 4, and gave birth at 2:30 a.m. two days later. According to White, The Gleaner played a role although Marley's birth, just one more of many, did not make the news. However, the afterbirth was wrapped up in a sheet of the newspaper and buried at the root of a young mango tree.

Bob Marley, barely into his teens, moved to the capital Kingston, eventually living in the famed "government yard in Trench Town" ('No Woman No Cry').

Trench Town was and remains a gritty inner city area, the former Marley home (as well as residence to many others) now Culture Yard, where there are some Marley remnants, among them a Volkswagen bus he owned. There is a Marley celebration annually in the week of his birthday, but Culture Yard has not seen the popularity or prosperity of Marley's other Jamaican homes.

Among the Marley songs to speak about his Trench Town experience are Trench Town, Trench Town Rock, No Woman No Cry, Burnin' and Lootin' and Natty Dread.

'Trench Town' is Marley's opus to his urban home, a declaration of where he lives way down on the social ladder ("we come from Trench Town") and at the same time whimsically looking at his community from the perspective of the outsider ("they say can anything good come out of Trench Town?"). On the other hand 'Trench Town Rock', which starts with the oft-quoted lines "one good thing about music/when it hits you feel no pain" speaks to the sound coming out of the unlikely space for music creation. Marley expands on the immediate community to encompass the area, singing " ... grooving Kingston 12, grooving, Kingston 12".

'Burnin' and Lootin'' begins with an all too familiar experience in Trench Town and many an inner city area - a morning raid by the security forces. In his explanation of the ingrained injustice which leads to confrontation on the streets Marley starts with his personal experience:

"This morning I woke up in a curfew

Could not recognise the faces standing over me

They were all dressed in uniforms of brutality"

'Natty Dread' is a jolly walk through the streets of Trench Town starting from First Street ("then I walk up First Street") and progressing in numerical order, with a 'trod' for some streets and a skip for another.

Physically, 56 Hope Road is less than four miles away from the 'government yard in Trench Town'. Socially, it is worlds away, especially in the mid-1970s when Bob Marley moved into the Island House once owned by Island Records head Chris Blackwell. Don Taylor details the deal he struck with Blackwell to transfer the property to Marley in his book Marley and Me. In The Book of Exodus, Vivien Goldman says the deal was made before the release of the Natty Dread album in October 1974. A £125,000 price was put on Island House, in addition to the advance on upcoming albums.

Today, 56 Hope Road is maybe the best known street address in Jamaica. Behind its understated white wall it houses the Bob Marley Museum, a restaurant, natural haircare salon, and the courtyard where Marley played football with his colleagues and friends is occasionally used to host concerts. The museum, which has an audio-visual component in the mini-theatre, contains many of Marley's personal items, including musical instruments and clothing. In addition, his room has been preserved and there are numerous newspaper article clippings which detail his accomplishments and the intense media attention paid to his life.

There have been claims about various love songs being written at 56 Hope Road for specific women. However, 'Ambush In The Night' speaks to a close encounter of the bloody kind, the December 3, 1976, attempt on his life two days ahead of the 'Smile Jamaica' concert at National Heroes Park, Kingston. Bob, Rita Marley and Don Taylor were injured and Marley insisted on performing at the free concert before an estimated 80,000 people.

'Ambush in the Night' gives the political background to the shooting, a synopsis of the incident and the power that protects Marley:

"See them fighting for power

But they know not the hour

So they bribing with their guns, spare-parts and money

Trying to belittle our integrity now

They say what we know

Is just what they teach us

And we're so ignorant

'Cause every time they can reach us

They keep us hungry

And when you gonna get some food

Your brother got to be your enemy

All guns aiming at me

They open fire on me now

Protected by His Majesty"

Still, after the Smile Jamaica concert he would take flight for London.

Vivien Goldman's The Book of Exodus is subtitled 'The Making and Meaning of Bob Marley and the Wailers' Album of the Century' and largely covers the period he spent in the city after the attempt on his life. Goldman writes that Marley left Jamaica at 7:30 a.m., following the concert. They went to Nassau, Bahamas, for three weeks and then on to London. It was in Nassau, though, that Goldman says he started to write what would become the Exodus album.

She quotes Neville Garrick as saying:

"It was his reaction to the shooting. He was not even putting pen to paper, because most of the time I wrote it down."

London was not, of course, entirely strange to Marley. That is where the original Wailers had met with Chris Blackwell and got funding for the Catch A Fire album. He had also done Rainbow Theatre concerts which were immortalised on the Live album in 1975. But now he would actually live and record there.

Keep On Moving, in a session which included Third World's Stephen 'Cat' Coore, was adjusted to address what was happening. Marley sings "Lord, they're gunning after me" and, memorably, instructs "tell Ziggy I'm fine and to keep Cedella in line".

And for those who thought he was abandoning Jamaica, to which Bob Marley would return 14 months after the shooting and the 'Smile Jamaica' concert, he did Running Away. At the end he sings (to the harmony of Running Away:

"No don't say that

Got to protect my life

And now you coming to tell me that I'm (running away)