'Greenfield' all but ready 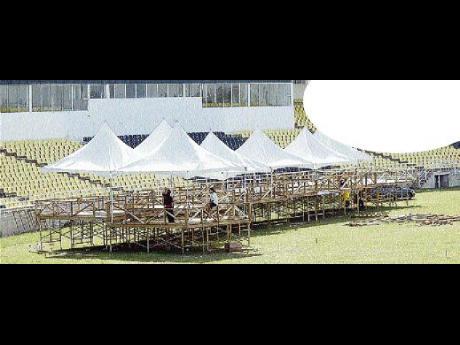 Photo by Adrian Frater
Workmen complete construction of the sky boxes at the Trelawny Multi-purpose Stadium last Thursday in preparation for the Jamaica Jazz and Blues Festival.

Come today, TurnKey Productions expects the Trelawny Multi-purpose Stadium (commonly called Greenfield stadium), the new home of its Jamaica Jazz and Blues Festival, to be 85 per cent ready in its quest to recapture the jazzy, sexy ambiance that has been one of the trademark features of the festival since its inception.

"We are 50 per cent ready at this time," festival coordinator Junior Taylor told The Gleaner last Thursday. "However, we expect to be 85 per cent ready on Sunday ... come Tuesday, we should be adding the finishing touches."

Taylor said Thursday, marks the start of the festival's three major nights at the US$30 million stadium. He expects the stadium to be every bit as exquisite as the Montego Bay venues - Cinnamon Hill Golf Course and the Aqueduct at Rose Hall - where the festival flourished in its previous 13 stagings.

"The venue is much more spacious and, depending on where you are in the stadium, it is just as scenic," said Taylor, noting here is a lovely view of the Caribbean Sea from some areas. "The venue is completely secure with chain-link fencing and we will have additional security as well."

Luxury sky boxes, which have become a big feature of major sponsors over the years, will have a new and exciting dimension this year as 'takers' will now have a choice between the original sky boxes, which are a part of the stadium's infrastructure, and the equally luxurious boxes created on the grounds of the stadium by TurnKey.

"We will have the sky boxes that are a part of the permanent stadium fixture," noted Taylor. "In addition, we will have another 17 or 18, strategically located on the grounds. All these will be ready way in advance of the start of the festival."

"The tents for the vendors should be 100 per cent ready by Tuesday so they can take control of them," noted Taylor. "We are expecting things to fall into place quite smoothly as we did not leave anything to chance in our planning."

The main stage, which is slated to be completed by today, will be located in such a manner that patrons will be able to view the performances if they choose to utilise the 5,000 permanent seats of one of the most modern sports and entertainment complexes in the Caribbean.

Just as at Cinnamon Hill and the Aqueduct at Rose Hall, the small stage, or talent stage, will be located in the food court area, offering patrons entertainment while they dine during breaks at the main stage.

"The talent stage will be ready at about the same time as the main stage," said Taylor. "We expect it to be just as exciting as former years."

In addition to being more spacious and having contrasting backdrops of the lush green hills of Daniel Town and the scenic Caribbean Sea, the stadium offers convenient parking, ruling out the need for the sometimes cumbersome shuttle-bus service.

The stadium's official car park can comfortably hold 3,500 vehicles and the adjoining car park, which is just outside the stadium, can hold a similar number.