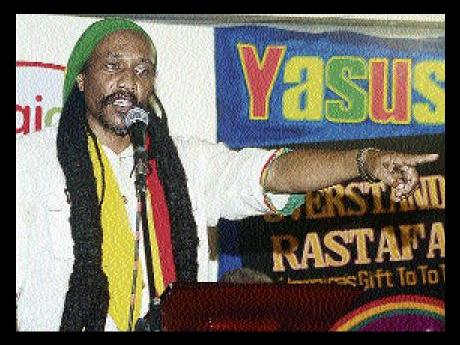 Militant. Provocative. Unapologetic. Complex. That's Yasus Afari, well-known Rastafarian performance poet and cultural ambassador. Always the rebel and ever advocating black heritage and his faith, his captivating presentations have left indelible marks in people's mind the world over. And there's no stopping him.

He's a crusader of sorts, never forgetting his purpose on Earth, spreading the word against inequity and iniquity. So, between September 28 and December 17, last year, he went to the United Kingdom (UK), Dubai and Australia to promote his book, Overstanding Rastafari - Jamaica's Gift to the World and his recently released CD, Kiss Mi Neck.

"The tour was in a continued effort to promote my works internationally and to represent my beloved people of Jamaica and my global nation state of Rastafari," he told The Sunday Gleaner. "In addition, the tour was for my historic presentation at the Parliament of the World's Religion (PWR) held in Melbourne, Australia, December 3-9."

Appearing in about 10 cities in the UK, Melbourne, Australia and Dubai, this multifaceted past student of St Elizabeth Technical High School and College of Arts, Science and Technology, using the concept of 'edutainment', worked in the capacities as 'edutainer', lecturer, dub poet, motivational speaker at lecture/performances, conferences, seminars, workshops, concerts and as consultant on a Rastafari research project. It was a full and busy itinerary starting with the launch of Black History Month activities in the city of Wolverhampton in England where he was "Visiting Poet in Residence".

Other notable events included the Kiss Mi Neck launch in Brixton, London, where there was strong support from the Rastafari community and colleagues such as Linton Kwesi Johnson; Yasus Afari and Friends and Brothers Making History with Macka B; the National Health Services mental health conferences with Professor Fred Hickling and Dr Hilary Hickling; the Croydon Eco Vegan Fayre in London, which showcased a variety of hemp products; and 'Green Faith', a climate change and environment conference.

Being an 'edutainer', students were never going to be left out. He's still soaking up their appreciation for his school presentations, especially the seven-minute ovation he got at Mapledean Primary in Sheldon, Birmingham. "Unforgettable" was how he described a six-year-old girl saying "you are a lovely man, you know". And so was students breaking out singing at the end of his performance at Holy Spirit Catholic School in Melbourne, Australia. "You are awesome! You are awesome!" they exclaimed.

Being presented onstage by a student with a crayon and pencil sketch of himself and some of the cultural elements and symbols alluded to in his performance was also "very touching".

"I really am just inspired by the youths from all over the world," he said. The visits to the prisons were no less emotional. And as for that Lodge event? "Well, I'm still processing that one," he revealed.

What he has certainly digested is his contribution to the PWR (he's one of its 115 international ambassadors) which he said was unprecedented for Jamaica and the Rastafari community in the 116 years of the parliament, which comprises more than 12,000 delegates from more than 80 countries and five continents. His presentation of 'Rastafari - The Livity of Spirituality' and his performances at the PWR Youth Parliament saw delegates being brought to tears.

Youths from different faiths, cultural, social and political backgrounds danced their way into a circle at the front of the stage. The stint was eventually extended by an hour. "My presence, performances, lectures and ambassadorial duties, interviews, documentaries and consultations were celebrated and crowned with honour for Rastafari, Jamaica and, by extension, myself. The post and pre-parliament events were most historic, inspirational and very well received," Afari said.

Yet, perhaps the most inspiring story he has come away with is that, in Australia, an African from Cameroon named Leo, and whom he had never heard of was arrested for possession of 'herbs', and when he went to court, he told the judge he lived by Afari's Overstanding Rastafari. The judge took the book and told Leo to return in two weeks.

Upon Leo's reappearance in court, the judge gave him back Overstanding Rastafari (OR) and told him he could go free. "This has caused quite a stir in Australia and Leo has since tracked me down and we are now telephone and email friends. Leo's story is incredible as it qualifies and consolidates OR as Jamaica's and Rastafari's "bonified" gift to the world. Kiss Mi Neck! It complex to blouse and skirt !!" declared the cultural maverick.

In assessing his 11-week tour, he said, "My name literally means 'The Most High's Gift of Vision'. In harmony with this assertion and awareness, my music, books and performances are strategically aimed at bringing this sacred objective into a sustained realisation and, in so doing, shall help to actualise Jamaica's sacred pledge of advancing the welfare of the entire human race. This UK and Australian autumn tour is consistent with this mandate and has actually contributed most significantly to the manifestation of my mission and purpose.

"Indeed, the tour inspired, motivated and uplifted my life and works as well as countless others with whom I've come into contact, directly and indirectly.

Consequently, Overstanding Rastafari and Kiss Mi Neck have been successfully launched into the "Orbit of Global Consciousness" and I have been re-enforced and fortified in the hearts and minds of people from all corners of our globe, so that signals mission accomplished."

His next international assignment is his first tour of Canada, where he will launch and promote Overstanding Rastafari and Kiss Mi Neck, and appear at lecture/performances, workshops, book and CD signings, and photo opportunity sessions. Yasus Afari is committed to spreading the words of Rastafari and the Jamaican culture, and that's why he's this week's keeper of the heritage.