CONSUMERS CRINGE ... as the basic food basket rockets out of reach 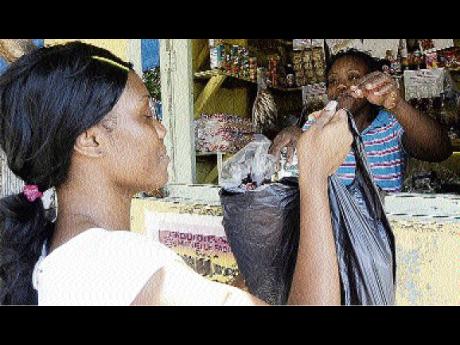 A string of price increases on basic food items has pushed more Jamaicans to the edge of the poverty line.

With the latest official figures showing the national poverty level at approximately 9.9 per cent, there are growing fears that the wave of price increases could lead to a sharp climb in the number when the 2009 figure is released this year.

In recent months, Jamaicans have had to dig much deeper to purchase essential items which make up the basic food basket.

The corner shops - the poor man's supermarkets - have taken a battering as their customer base has shrunk. But not wanting to lose them entirely, some of these shop owners have elected to absorb the increases instead of passing them on to their customers.

The shop owners know the hardships because they face them too. And wisdom tells them any increase in the price of certain goods would leave the goods on the shelves, so they bite the bullet.

Jennifer Jones, owner and operator of a corner shop in Allman Town, has been sinking her teeth into the price increases. The 43-year-old wife and mother of four said oftentimes, she absorbs the price increases because she knows that the residents cannot afford them. She explained that any upward movement in prices results in goods staying on the shelves.

Jones claimed that this month had been the roughest she had experienced since buying the business from her sister three years ago. "Mi go wholesale this morning and everything raise," she said.

The Consumer Affairs Commission's (CAC) monthly survey of grocery items posted on its website showed from January 2009 to this month, the prices of all the basic food items had increased, with the figures spiralling in some parishes.

Items like bread, cooking oil, sardines and cornmeal have seen significant increases. This has brought much hardship to consumers who were already confronted with challenges due to the global recession.

Dorothy Humes of Spanish Town, St Catherine, said she is feeling the pinch of the financial crises.

"When I go to supermarket, I am confused because sometimes I don't know how to stretch the little that I have," Humes said.

She added that she became even more confused when confronted by her salary that had not increased to keep pace with the climbing prices.

"With a salary of $5,000 per fortnight, which has remained unchanged since December 2008, I am forced to buy less for my family. And maybe in the next two months I will have to further adjust my spending, which I don't know how to do," she argued.

But president of the Jamaica Manufacturers' Association, Omar Azan, is urging consumers not to blame local business producers.

Azan told The Sunday Gleaner that while manufacturers have tried their best to "eat a lot of the margins", the increases in the cost of electricity and raw materials sometimes leave them with no choice but to pass on the burden to the consumer.

"If it's a major shift, we don't have any choice but to raise the items, but the volumes are not there, so it wouldn't make sense to raise the prices every time," Azan said.

In an effort to contain prices, Azan said manufacturers are forced to cut back on the level of wastage and try to be more efficient, while trying to increase their productivity levels.

"While we are trying to keep prices down, it is not something that will happen overnight. It is going to take a little time," he added.

He said the company has tried its best to contain the expenses and increase production efficiencies in order to keep the prices down and at the same time keep good-quality products.

Communications specialist at the CAC, Dorothy Campbell, is urging Jamaicans to craft a budget before spending the little money they have.

"Persons have to make an assessment of their earnings and make sure they separate items that are of need from items that they want," she said.

Campbell encouraged persons to reduce consumption while at the same time going for items that are nutritious and could serve the entire family.