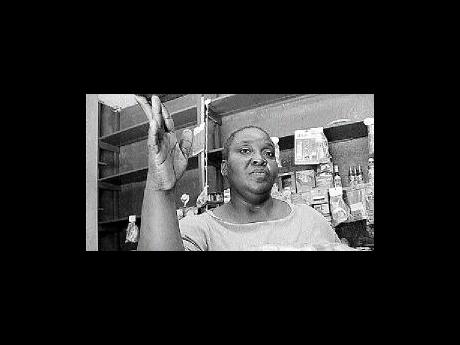 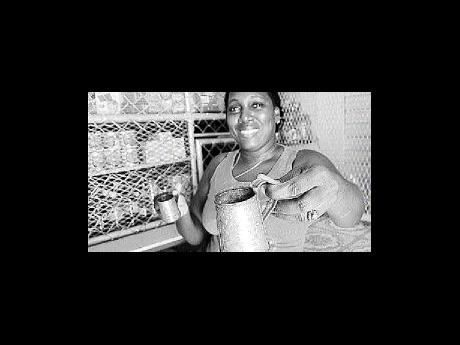 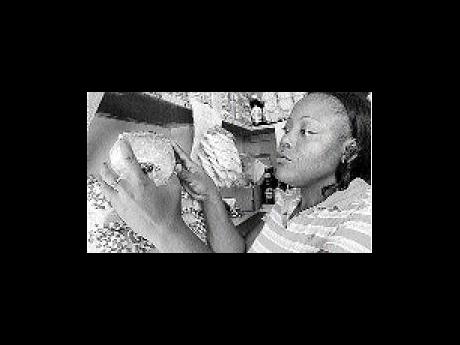 Photos by Rudolph Brown/Photographer
The empty shelves behind Carmen Smith, owner and operator of Fatty Shop in the west Kingston community of Fletchers Land, is not a sign that goods are selling fast. On the contrary, things are slow and Smith is finding it hard to restock her shelves.

At 40 years old Denise, a single mother of one, deeply appreciates the personal and financial progress she has made over the past 15 years.

In 1995, she was working at a statutory organisation as a customer-service agent, earning $2,500 fortnightly, leaving the company in 2002 in a much different position, grossing about $1.2 million annually.

She now works at a multi-national entity, grossing $3 million annually. Over the past decade, she has also purchased a town house in her preferred area and augmented her academic qualifications with a master's degree in an area she likes but would never have once dreamt of studying.

"I would be very ungrateful if I said I have not improved. I am doing a lot more," Denise said.

However, in doing more, she is also doing less - less driving, less celebration of achievements which includes eating out, less Internet surfing at home, buying fewer items of clothing and 'cutting har eye' on bargains that at one point she would have leapt at.

There seems to have been two watersheds in Denise's personal plan to deal with the financial crisis which really hit her in the middle of last year, before being compounded by the tax package introduced at the start of 2010.

Denise tells The Sunday Gleaner that on a summer trip to the US, when she would normally restock her wardrobe, she reined herself in. "I wear the clothes that I have and I mix and match," she said.

And while she once had a number of browns and earth tones in her wardrobe, when she does make a clothing purchase she goes for colours, as these are more flexible. "I just combine and say I am a very bright person," she said.

Part of her cutback, however, has included an increase in one area. "Normally I go to a store and buy cheap shoes," Denise said. These would not last very long and, "when I went away last year, I bought good shoes and I rotate them."

Then, around Christmas, there was the adjustment to the then impending gas-tax hike. "Up to December, I would go anywhere and fill up," she said. Now, Denise uses only a gas station in Meadowbrook on her regular route, as "they have the most reasonably priced gas. It's only if my car is on 'E' I go somewhere else, and then it is just enough to get me there".

Although Denise says "I have always felt a pinch on my pocket" and laments that she has never seen the effect of a tax-threshold increase in real terms ("maybe $1,000 or $2,000 more"), the cutbacks she has been making since last year are really new territory. She tells The Sunday Gleaner, "I am very conservative with my utilities". This including turning off the lights, skimping on water use and "I do the minimum Internet hours at home".

She is very happy that she has a pre-paid land line, as with the post-paid service, "even if I do not use it, the service charge is ridiculous. Me nah pay no more money than me need to!"

That includes sticking with her car, despite the lure of deals that have come her way which would require going into more debt than she is already saddled with. "My car is a very old car that I am 'plankering' with. Nobody going to tief it. It is as old as the hills," she said.

That comes with reliability problems. Sometimes it refuses to start, at other times, she presses the gas pedal "and it just siddung there and look at me". She also says that for borrowing purposes, she would need the equity in a newer car, but purchasing one now is simply not an option. On the other hand, walking is, as Denise carries along her sneakers and walks the many 10-15-minute journeys she would normally drive.

There was a time, too, when there were numerous causes for celebrations, eating out at trendy spots. The birthdays, her child's school achievements, and a myriad of occasions still come, but the eating out has been minimised. As has buying lunch during the days for both mother and child, as they 'brown-bag it' now. Films and plays are now treats, and impulsive buying at the supermarket is a no-no.

If it is not on the list of necessities, it does not go into the trolley.

Sticking to the budget she now prepares for every month, Denise says: "I have not incurred any new expenses. I just deal with the ones I have. Now I am in a better position to deal with my debt."

There is one area though, where she refuses to cut back: television. "That's my only source of entertainment. When I come home, there is nothing else to do," Denise said.

Shopkeeper Jennifer Jones, who operates a shop in Allman Town, displays two of her oil measures - big gill and half gill - sold for $40 and $20, respectively.

Camille Hudson, owner and operator of a corner shop called Ackee Tree Hideout located in the west Kingston community of Fletchers Land, sells a loaf of bread for $200; half fetches $100, and quarter, $50.