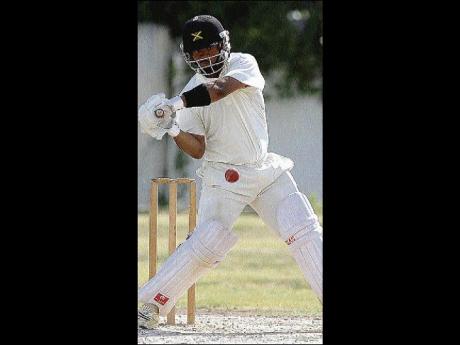 Carlton Baugh Jr ... scored attacking 124 in Jamaica's first innings total of 429 on the second day of the third round WICB regional first-class championship match against Guyana yesterday at Foursquare Oval.

Jamaica fortified their position against Guyana, after Wavell Hinds and Carlton Baugh Jr plundered hundreds in a record stand in the West Indies Cricket Board (WICB) regional first-class championship on Saturday.

Guyana, replying to Jamaica's first innings total of 429, reached 112 for five at the close on the second day in their third round match at Foursquare Oval.

The Guyanese wobbled, after their captain Sewnarine Chattergoon and Rajendra Chandrika featured in a solid opening stand of 56.

Assad Fudadin was not out on 31, Chandrika scored 30 and Chattergoon got 22, and fellow left-hander Narsingh Deonarine made 24.

Nikita Miller has been the most successful Jamaica bowler so far with three wickets for 25 runs from 15.3 overs.

Unlike the Guyanese top-order batsmen, Hinds and Baugh used the ideal conditions to put Jamaica into an impregnable position.

They added a record 232 for the seventh wicket to establish a new mark for Jamaica in the modern West Indies first-class championship (1966-2010).

This eclipsed 143 between Robert Haynes - now a West Indies selector, and a spectator in the comfort of the pavilion - and Shane Ford against Barbados, 15 years ago at Sabina Park.

Left-arm spinner Veerasammy Permaul was the pick of the Guyana bowlers with five wickets for 91 runs from 36.1 overs.

Both century-makers were fortunate. Hinds, on 85, was dropped at extra cover by Assad Fudadin off Brandon Bess, and later, Baugh, on 100, was dropped by stand-in 'keeper Rajendra Chandrika off Esuan Crandon.

They carried Jamaica to 360 for six at lunch, but they were dismissed in the first hour after the interval.

Baugh was caught behind, when he top-edged a sweep at his 113rd delivery from Royston Crandon after batting for close to 3-1/2 hours. He struck 13 fours and three sixes.

AT CAVE HILL: Combined Colleges & Campuses, trailing by 128 on first innings, reached 38 for two in their second innings at the close on the second day of their third round WICB regional first class game against the Windward Islands at the 3Ws Oval on Saturday.

AT KENSINGTON OVAL: Barbados, responding to Trinidad & Tobago's 271 for nine declared, reached 327 for six at the close.