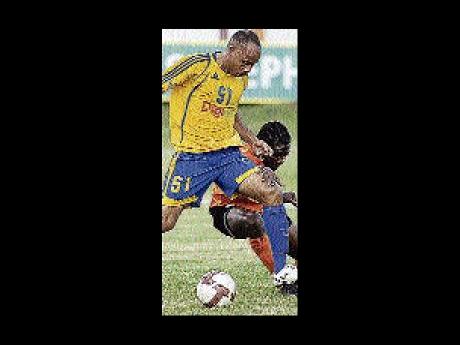 DONOVAN HAYLES was most apt in his analogy regarding the importance of the Digicel Premier League (DPL) third round which kicks off today; and the need for his Harbour View team to record their first win against Sporting Central Academy this season.

"Right now for all teams in the competition points are very meaningful, whether it's to stave off relegation or to win the championship," observed Hayles of the match they will host at Harbour View Mini Stadium at 6:30 p.m. today.

"It's like a crab in the barrel syndrome. The teams that are going down are looking to drag down every team to lift themselves up. We've to look to win every game."

Harbour View are coming off a title success, beating Waterhouse 1-0 in the DPL End of Round final at the National Stadium last week Sunday, through a goal from their captain, Lovel Palmer.

The Harbour View coach has said repeatedly that the Stars of the East's real ambition is to win the championship.

They now lead the 12-team race on 42 points, three ahead of the team that set the third round on fire, Waterhouse, by winning 26 of a possible 33 points. They are followed by Tivoli Gardens, the defending champions, who have 38; while St Georges Sports Club (36) and Boys' Town (35) are well within striking distance.

Both Harbour View-Sporting Central fixtures this season ended in a draw - 1-1 at Compound and 0-0 at Brancourt.

Even though his defence, with national goalie Dwayne Miller and giant centre half Dicoy Williams, have been strong and conceded only 13 goals, Hayles believes the match will be decided in midfield, where Jermaine Hue, Palmer and Richard Edwards, if fit, should lead their charge.

Sporting's offence has been boosted by the return of Alanzo Adlam - from Harbour View - with Jermain Christian, Kadian Wynter, Jevaughn Watson and Levaughn Williams also likely to figure in their attacking plays.

Decent second round performances earned them 18 points and pushed them up the standings considerably into a clear sixth.

Waterhouse have turned in the best records at either end of the pitch, resulting in a remarkable turnaround that catapulted them to second on 39 points; being pointless after their first five fixtures.

Complementing their points haul last round, they scored 14 goals and let in four, standards their coach Geoffrey Maxwell is looking to maintain when they travel to face Rivoli.

"This is the round that decides the championship, not the fourth round," said Maxwell.

Long-serving striker Kevin Lamey has been a major trump card for the Drewsland team. He will headline their charge along with Jermaine Anderson and midfielders Damion Williams and Vincent Earle.

However, Rivoli's defensive system will have to play a key role if they are to aid their relegation cause. Though fifth from bottom, the Spanish Town team has conceded the second highest number of goals - 26 - and their 22-point tally is only two better than bottom-of-the-table Village United of Trelawny.