Gleaner jazzes up a packed Deck 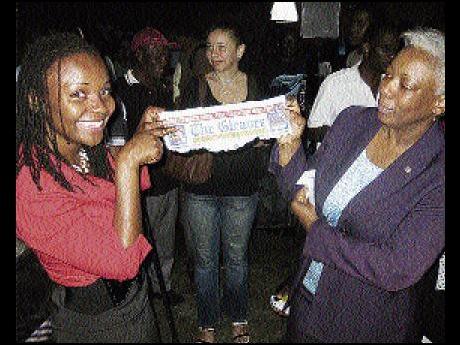 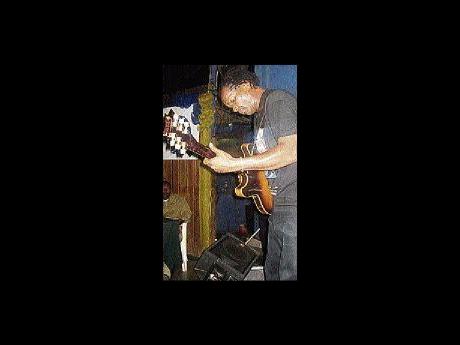 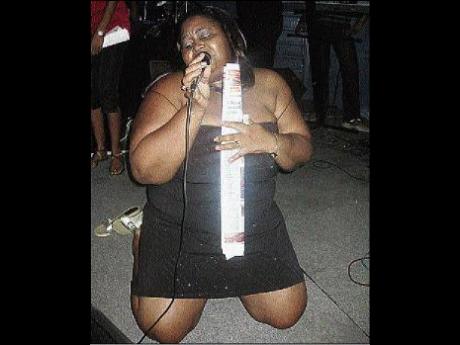 A thrilled Kennise Watson (left) shows her Thursday Gleaner masthead to an approving Mary Dick of The Gleaner, after winning a ticket to Jamaica Jazz and Blues last Thursday evening. Watson paid $20.10 for the ticket with 41 coins, beating out four other contestants who came up with fewer coins for the stipulated ticket price at The Gleaner's free pre-festival event. - photos by Mel Cooke

Last Thursday night's taster of jazz and blues at The Deck, Trafalgar Road, New Kingston, served up a delightful sampling of music to a crammed house.

However, as soulful as Suzanne Couch was, and despite Bluegrass in the Sky's rapid-fire lyrics, Denver D's percussion and dancing skills, Aisha Davis' superb singing and movement and Mo'Jahrock's complete sound, it was Vanessa's song to a newspaper which brought the crowd to a screaming fever pitch.

At the free concert being staged by The Gleaner Company, the relatively short performances were interspersed with ticket giveaways to next week's Jamaica Jazz and Blues Festival. All that was required was a masthead from that day's Gleaner or a printout from the online publication, and a willingness to do the bidding of Hope MacMillan, a combination of concert host and bedevilling games mistress.

Vanessa's over-the-top song (plus many a shake of her ample frame in a figure-hugging black dress) came in the night's final competition, where the five contestants were required to woo, dance with, thank and get the number of their partner - a copy of The Gleaner.

The quintet of Jazz and Blues hopefuls was whittled down to two in short order and when Sharl purred the numbers she was getting from her partner and the crowd howled it seemed that Vanessa would have a tough time of it. Responding like a woman on a mission, Vanessa fell to her knees and sang I Had The Time of My Life to a rolled-up copy of the newspaper in one hand as if they were alone in the universe, her face contorted with emotion that kept increasing to the climax of the number.

When MacMillan asked who the winner was, even Sharl pointed to Vanessa, now on her feet and smiling, but they were both given tickets to Jamaica Jazz and Blues.

Save for the grass and amphitheatre style seating at the Trelawny Multi-purpose Stadium, The Gleaner's sampling of jazz had many of the elements familiar to those who have previously made the trek to the Jamaica Jazz and Blues Festival. There were excellent performances, a very large crowd (especially for the venue) and a glimpse of the informal fashion show that the women put on for the event.

Couch opened the night with her gentle yet insistent approach, playing the keyboards along with the Bare Bones band, letting her vocals do the performance on How Sweet The Night and A Little More Love, a song from when she was with a group some 15 years ago. Being seated didn't mean being languid, Couch going uptempo, when required, to very good effect and closing on a high note.

Bluegrass in the Sky, with Simon up front on often rapid-fire vocals as dancehall met the blues and a violinist adding a highly distinctive aural and visual touch to the band, went all original. Simon informed, "I am king of my destiny" and, after telling the audience that the band was going to pick up the pace, said the violinist complains that "every time we play this the violin strings feel it".

"Another violin to the graveyard," he said as they got into the song, which mused "the road is deadly, my load is heavy".

With a full band in tow, Denver D put on an impressive all-round show, even in the limited time, singing the constructed word, springing from music that formed the basis of his first song, swishing a great Latin-style leg and hip with a lady and sitting to play the drums arranged around him in a deft, dazzling display.

On Complicated, Denver D connected with a lady seated at the front of the audience and he helped the men with a succinct, effective way to rid themselves of a bad relationship.

Aisha Davis took a minimalist approach, working with a sole keyboard player and leaving the microphone on the stand as she opened with At Last, her full-length, loose white dress a contrast to her auburn hair. The audience cheered from the first word and when it was finished, Davis went original with Say My Name, fusing song and, intermittently, dancing with a male singer who made it three onstage.

Davis cocked a hip to the left and sang "a murder when me step inna di place/an dem see dem curves ya".

Maurice Gordon of Mo'Jahrock Band performs a solo at last Thursday's 'A Taste of Jazz', hosted by The Gleaner at The Deck, Trafalgar Road, New Kingston.

Vanessa gets down on her knees to sing thanks to her dance 'partner' - a copy of The Gleaner - and warble his telephone number at the free pre-Jamaica Jazz and Blues concert held at The Deck, Trafalgar Road, New Kingston, last Thursday night.