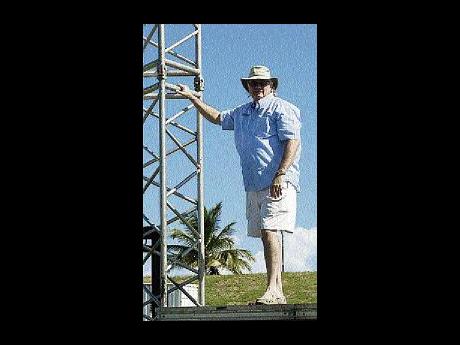 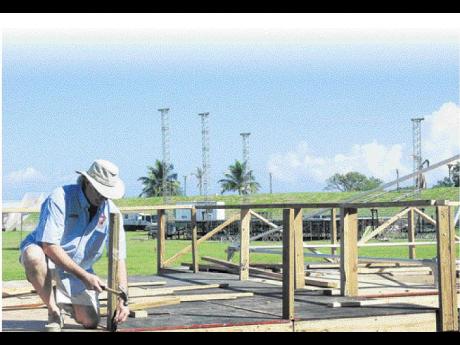 Walter Elmore checking out the stage being built for the Jamaica Jazz and Blues Festival at the Trelawny Stadium.

"When I show you the parking, you are going to freak out," boasted Walter Elmore with pride.

Hardly giving Flair a chance to get a word in, like a little baby with a new toy, the chief executive officer of TurnKey Productions' (organisers of the Jamaica Jazz and Blues Festival) eyes sparkled as he rejoiced in delight with his surroundings at the Trelawny Stadium.

"It gets better; let's go upstairs," he continued, talking happily, his strides matching the energy he exudes each time he executes a mammoth event.

Not once did the trained hotelier have to pause in response to the questions he fielded from Flair.

Seventeen years in a business that has seen promoters lose their shirts, and Elmore could easily have walked away but, no, his story is one of successes.

He carries around the same academic credentials as the noted Josef Forstmayr, managing director of the elegant Round Hill Hotel and Villas in Hanover, the two having attended the prestigious Salzburg Hotel School in Austria at different times.

And yes, he did follow through on the training he received in university by working as food and beverage director at Bay Roc (now Sandals Montego Bay). Despite landing on the 'ground floor' when the Air Jamaica Jazz and Blues Festival (now Jamaica Jazz and Blues) started in 2003, he is now at the 'penthouse', holding his own festival in his hands.

It is uncanny that Elmore, who was able to pull top-selling artistes out of England: Josh Stone; the amazing Babyface and combine 'Tamia', Deborah Cox and Kelly Price to perform on the same stage as the soul-stirring Gladys Knight and the 'saviour' Billy Ocean, could say he represents the average person "musically".

Elmore considers himself "one of the best judges of music, because I don't know very much about it. I just love music; I represent the average person out there".

In fact, Elmore is easy-going, somewhat free spirited and even misunderstood by those who don't know him, yet "I get along with just about everyone," he tells Flair.

He draws his inspiration from people from all parts of the world, who send him a list of the artistes they wish to see on the stage annually.

"And I listen, I am a great listener. Like you (this writer), you send me a list, then I compile."

At the end of most of his compilations, he is able to offer all genres of music, aimed at pleasing all age groups he said, explaining that his annual event is not a concert. "It's a festival; we want people to come for the event, the liming."

"Look at the coconut trees over there," he pointed towards the images that form a backdrop for the stage, "all of that will be part of the show, offering the type of ambience our jazz supporters have become accustomed to," he added.

Elmore, who spent several years running one of the top private clubs in Florida, in the United States, called 'Mutiny', grew up in a hotel that his parents owned here in Jamaica.

His relationship with the music industry started in 1993, when Reggae Sunsplash festival vacated Montego Bay, (its home for more than 10 years). Elmore and several of his business associates created a replacement festival, Reggae Sumfest, which continues to thrive in Jamaica's resort capital.

"Walter's Bar, which I owned at the time, made really good money during Sunsplash, so when they decided to leave, I said 'No, this can't work!'" Elmore laughed.

But getting involved in a business and not learning the skills is just not one of the attributes that makes Elmore the man he is. "I learnt about the production of events of that magnitude from just being on the job."

Today, he is one of the most sought-after producers, and he has worked on both the St Kitts and the Turks and Caicos jazz festivals.

Walter Elmore shows his versatility with hammer and nails. - PHOTOS BY Janet Silvera

His only regret is not being able to bring the likes of Elton John, Stevie Wonder or Celine Deon to perform locally. "I have always tried to get Stevie and Celine but the ticket prices would be completely out of the reach of the people," he told Flair, adding a ray of hope with, "except now, because this new venue can accommodate more people, if reconfigured, I am convinced that as time goes by I will be able to bring in those big names as well".

The father of one, a son, Martin, a software architect with Motorola, who has been working with him since age 12, says the thing that makes him tick is walking onto an empty piece of land, "and imagining the skyboxes, the stage, the audience, the complete package".

He adds: "I have a knack for doing those, and I never compromise on the quality of the production."