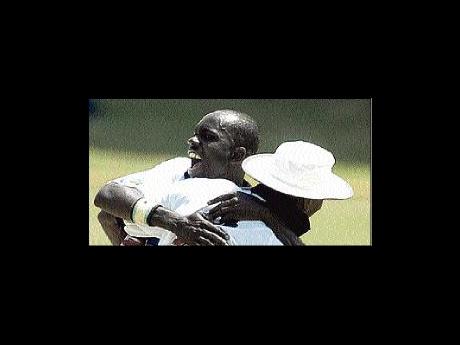 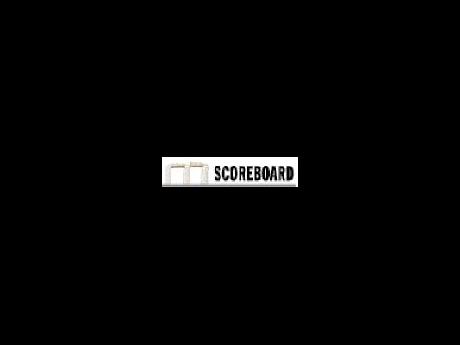 Nikita Miller (left) celebrates taking a wicket with a teammate.

Leaders Jamaica were within sight of another victory, after Nikita Miller bowled them to a 263-run first-innings lead over Guyana, in the WICB regional first-class championship yesterday.

Miller extended his rich vein of form when he captured six wickets for 42 runs from 33 overs, as Guyana were dismissed for 166 in their first innings, about 15 minutes before the lunch interval on the third day of their third-round match at the Foursquare Oval.

Dave Bernard Jr then grabbed three for 25 from nine overs, as Guyana - following on - limped to 161 for four at the close.

Earlier, Jamaica found little or no resistance from the lower half of the Guyana batting, after their opponents resumed from their overnight first-innings total of 112 for five.

Miller claimed three of the last five wickets, as Fudadin ended with the top score of 39, but none of the batsmen in the lower half passed 20, with the best efforts of 17 coming from Royston Crandon and Derwin Christian.

In the last decade, the two teams played each other 15 times, with Guyana winning just once, Jamaica six times, seven drawn and a no-decision in the 2005 second-leg contest.

AT KENSINGTON OVAL, Barbados: Trinidad and Tobago (T&T) used a superb maiden century from Justin Guillen to stage an amazing fightback against Barbados on day three to give themselves a chance of victory in their third-round match yesterday.

AT CAVE HILL, Barbados: Spinners Shane Shillingford and Rawl Lewis grabbed four wickets each as the Windward Islands swept aside Combined Colleges and Campuses (CCC) and surged to a nine-wicket victory inside three days yesterday.

After reducing the home side to a sub-200 second-innings total, the Windwards - set 71 to win - sped to 71 for one for a handsome victory at the Three Ws Oval, rebounding from their first-round loss to Jamaica.