Robinho says he is about to leave City 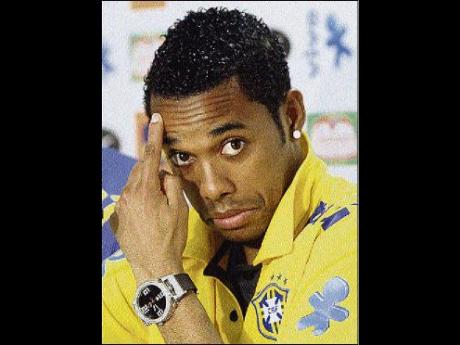 Manchester City striker Robinho told Brazilian radio yesterday that he is about to leave the Premier League club, and the president of his former team in Brazil said transfer talks have already began.

Robinho told Radio Bandeirantes that he had been advised by Man City directors that yesterday's match against Scunthorpe in the FA Cup would probably be the Brazilian forward's last for the club.

Robinho would likely return to Brazilian club Santos on a loan, although the striker said details of the possible deal had not been plotted out yet.

Santos president Luiz Alvaro de Oliveira Ribeiro said the club is already negotiating with Man City directors and will meet with them in London tomorrow.

"In the next day the situation can change, but at the moment he stays here and I am very happy for him," Mancini said after City's 4-2 FA Cup win over Scunthorpe in which the Brazilian scored the final goal.

"I think one player can stay in a squad only if he is happy - if he wants to play every game and if he wants to work every day. That is most important because the players and manager must be happy," Mancini added.

Oliveira told Radio Bandeirantes that he talked to Robinho a couple of days ago and the club is already looking for a new sponsor to try to pay for Robinho's salary if he returns.

"We are already working on that," Ribeiro said. "I'm sure Robinho's name will attract a lot of attention."

Robinho admitted he was not playing well for City, but complained that he was not being allowed to play regularly under Mancini.

"The coach was very sincere with me and said that I would play every other match," Robinho said. "I told him that would not be interesting to me, it's a World Cup year."

Robinho said he wanted to return to Brazil to boost his chances of securing a place in Brazil's World Cup side.

Robinho has been a regular in Brazil's squad under coach Dunga, but several players have been competing for a position in the team's attack for the 2010 World Cup in South Africa. Among those vying for a spot are Adriano and Ronaldo, who recently successfully decided to leave European football to try to attract Dunga's attention in Brazil.

Robinho, who will turn 26 today, said he was disappointed with the style of coaches in European football.

"They choose a formation and want you to play in it, it doesn't matter if you are short or tall," he said.

Robinho would likely get a pay cut if he ends up leaving Man City to play for Santos, but he said that would be OK.

"The financial situation is important, but being happy also counts," he said. "To play with Santos again would be exceptional."

Robinho moved from Real Madrid to Manchester City for a British-record fee of 32.5 million pounds (euro40 million; US$58 million) in 2008. He reached stardom while playing for Brazilian club Santos, Pele's former club, before going to Spain in 2005. He led Santos to the national league titles in 2002 and 2004, in a team that also had Juventus midfielder Diego.

Robinho said he talked to Diego recently and said his friend told him to go play with him at Juventus, but Robinho said he would rather return to Santos.