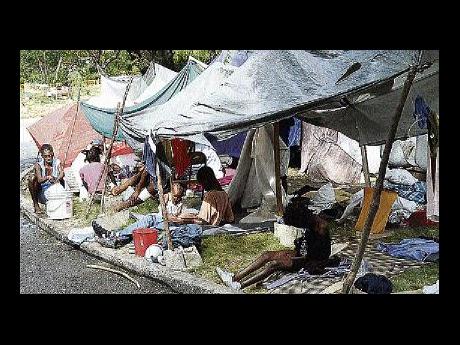 These Haitians, though living under makeshift tents which can't be expected to last very long, are still better off than many who only have blankets and the night sky for shelter. - Ian Allen/Photographer

THE COLLAPSE of much of Haiti's capital has a large part of the nation struggling just to find a place to sleep.

As many as one million people, one person in nine across the entire country, need to find new shelter, the United Nations (UN) estimates, and there are too few tents, let alone safe buildings, to put them in.

That leaves about 700,000 other people living on the streets around Port-au-Prince under whatever they can salvage. In the case of Jean Anthony's family, that is a blue plastic tarpaulin for a ceiling and a faded pink sheet with a floral print border for two walls.

"I'm not sure what you'd call it, but it's much more than terrible," said Anthony, the 60-year-old owner of a collapsed restaurant. Thousands of people were camped around him Monday across from the collapsed National Palace, amid piles of trash and the stench of human waste.

"We live like dogs," said Espiegle Amilcar, an unemployed 34-year-old who has been staying under a sheet of plastic nearby.

Disturbances erupted near the camp later in the day when Uruguayan UN peacekeepers fired pepper spray to try to disperse thousands of people jostling for food aid.

Some people ran, but undeterred young men in the crowd surged forward to grab bags emblazoned with United States flags that were filled with pinto beans and rice. It was not immediately clear if anyone was hurt.

Aid organisations say they were collecting tents, but few so far were in evidence.

And the International Organisa-tion for Migration, an intergovern-mental agency, says it could take experts weeks to search out suitable sites for enough tent cities to hold earthquake refugees.

Vincent Houver, the Geneva-based agency's chief of mission in Haiti, said on Sunday that the agency's warehouse in Port-au-Prince holds 10,000 family-size tents, but he estimates 100,000 are needed.

The organisation has appealed for US$30 million to pay for tents and other aid needs and has received two-thirds of that so far, he said.

The fortunate few to get a formal tent so far include Fenela Jacob, though the 39-year-old has to share the 13-by-13-foot (4x4-metre) space with four other mothers and 16 children at a camp run by British-based Islamic Relief Worldwide. The land was donated by a Catholic church.

"We've got a lot more space; it's a lot more comfortable" than the bed sheets and sticks people were living in earlier, Jacob said.

The tents are so coveted, Jacob said, that she was forced to give up a second tent the charity had offered for her large group because other people threatened to burn both down if she didn't give one up.

The Islamic group managed to get 500 people into 82 tents left behind by a Qatari search and rescue team.

Haiti's government wants many of the homeless to leave the capital city of two million people, to look for better shelter with relatives or others elsewhere.

Officials estimate that about 235,000 have taken advantage of its offer of free transport to leave the city, and many others left on their own, some even walking.

That may have far-reaching effects, shifting the places where aid and reconstruction must be focused, Prime Minister Jean-Max Bellerive told senior foreign officials in Canada on Monday.

"The distribution of people (and) their needs have changed," he said. "We have to reassess the whole country," in terms of job creation and requirements for housing.

Earthquake activity in the region has been under the spotlight since a magnitude 7.0 temblor destroyed large parts of Port-au-Prince in Haiti recently. Here are some of the major shakes which have hit the region this month.