Ground broken again... Work to begin on JFF academy at UWI next Monday 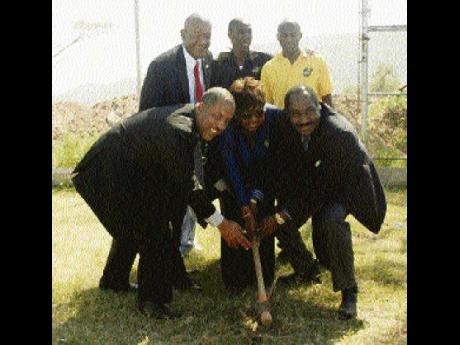 For the third time around, ground was broken for the construction of a US$1.2 million Jamaica Football Feder-ation (JFF) academy, during a short exercise at the University of the West Indies (UWI) yesterday afternoon.

This comes after an initial attempt to establish a similar facility in Portmore, St Catherine, in 2003 through support from FIFA's Goal Project. This plan was, however, sent through the window a year later following a change of leadership at the JFF, resulting in the project being moved to Malvern in St Elizabeth a year later. That plan was, however, shelved after Captain Horace Burrell's subsequent return to office.

The facility will be constructed at the UWI over three phases, on 6.5 acres of land, located just north of the mini-stadium being built for sprinter Usain Bolt, with contractors Tank-Weld Special Projects expected to begin their operation next week Monday.

Phase One, which will involve the creation of one football field, dressing-room facilities and a technical area for use by training staff, is scheduled for completion in September this year. It will be constructed with the US$400,000 FIFA Goal Project disbursement.

Once completed, the Captain Horace Burrell-led JFF will re-apply to FIFA for subsequent disbursements to complete the other two phases, which will include the establishment of a second playing field, and administrative and dormitory facilities.

Burrell was excited about the developments.

"I am extremely happy that at long last the technical centre is going to be built. What I'm happy about most is that it's going to be built at a venue that is convenient to the development of our players and the development of football on a whole; I'm very happy," Burrell said. "Having it constructed here at UWI is an excellent idea, similar to the one which would would have been in Portmore."

Despite the fact that there are no guarantees as far as additional disbursements from FIFA for the other two phases is concerned, the former army man remains optimistic that everything will fall into place for the completion of the well-overdue facility.

"I am a very optimistic person, and in the same way that I knew that we would have been able to find a new location which made sense, it's the same way I am now feeling that at the completion of Phase One in September, we will be able to get additional funding for Phases Two and Three," Burrell assured.

Sports Minister Olivia Grange, who was also on hand to share in the historic moment, believes the academy will aid the development of talent from Jamaica and elsewhere.

Said Grange: "I think that the facilities that are being constructed will help us to further enhance our record in sports. It's the manifestation of a lot of work and we are hoping that players from other countries can benefit from the coaching services and expertise that will be provided," Grange added.

Meanwhile, UWI Principal, Professor Gordon Shirley, described the agreement as a very important one for the institution as it fits perfectly into its ambition to pair sporting development with scientific advancement.

"As a part of our objective to develop this Bowl (UWI Bowl), which has been here for a while, into a world-class facility capable of supporting the development of our athletes of all types, we have embarked on a fairly ambitious programme," Shirley pointed out.

"We have a number of other elements that go into the making of a world-class athlete, and we have been able to add all of those pieces to ensure that the athlete is well developed."