Harbour View's experience got them through 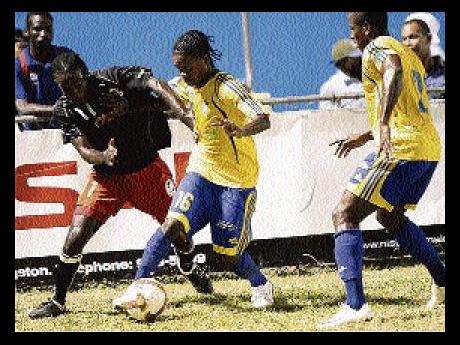 Harbour View's coach, Donovan Hayles, said the level of maturity displayed by his team was crucial to their 1-0 victory over Clarendon's Sporting Central Academy in their Digicel Premier League match at the Harbour View Mini Stadium.

Kavin Bryan made the all-important strike, scoring in the 44th minute as a result of a counter-attacking play.

Hayles said his team played a patient game and exploited Sporting Central's inexperience to chalk up an important three points.

"I think that it was important to maintain ourwinning streak, even though one would have liked to have scored more goals. But I have to give credit to Sporting Central. I thought for the first 30 minutes they took control of the game," Hayles said.

He added that Sporting's fast start wasn't a surprise to him and urged his team to be "patient, track and work hard".

Hayles noted: "While they (Sporting) were playing good, as a young team there is a lot of inexperience there ... . We were able to take control of the game and scored a goal against the run of play, which was good for us," he said.

While Sporting dominated the first half, the second half was more evenly contested, as Harbour View's Jermaine Hue, André Steele, Kimarlee Brissett and Bryan took the fight to the Clarendon-based team and kept their one-goal advantage to record a crucial victory.

The win pushed Harbour View to 45 points, four ahead of second-place Tivoli Gardens (41), which defeated Humble Lions 2-0, and five ahead of Waterhouse (40), which drew 0-0 with Rivoli United. Sporting remained in sixth position on 28 points.

"If the other team scores and we don't, then we lose. We dominated the first half and Harbour View scored from a mêlée. We knocked the ball around, we played well but the goal was not coming."