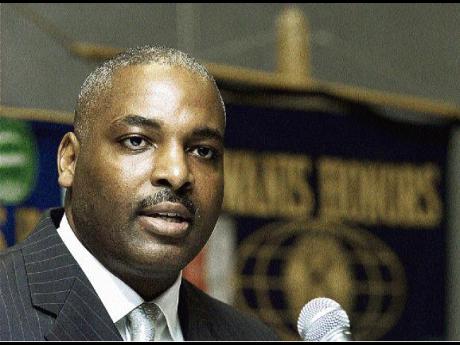 Even as the Government unveils tough new financial regulations mandated by the International Monetary Fund (IMF), Rohan Barnett, executive director of the head of Jamaica's financial services watchdog, the Financial Services Commission (FSC), is warning against what he describes as over-regulation, fearing a negative impact on economic growth, which continues to elude Jamaica.

Barnett's caution, came last week at the same function at which finance minister, Audley Shaw and Bank of Jamaica governor, Brian Wynter, offered details of the looming laws to tighten the screws on banks, near banks and their owners. Still, his position did not appear to be a divergence of views on the pending financial sector overhaul.

For his part, the FSC head made it clear that he would not pander to the extreme of a laissez faire approach, noting that the era of what he called the soft touch approach to regulation had also long passed.

"Over-regulation can have negative effects on an economy through the stifling of innovation and entrepreneurial activity, thereby narrowing diversity in financial products and institutions which, in turn, can lead to a suppression of capital formation and economic growth," Barnett said.

For him, over-regulation exists when the costs attached to a proposed regulatory measure exceed the perceived benefits.

It is against this background that the boss of the FSC, which assumed greater powers in the aftermath of the 1990s financial sector meltdown in Jamaica, noted that financial authorities should guard against the tendency to over-regulate when times are bad.

"Critics have since accused the FSC of being heavy-handed," said Barnett.

"In my opinion, the FSC has been vindicated," he declared, noting that in the aftermath of the Lehman Brothers collapse Jamaican securities firms were faced with margin calls which threatened their liquidity positions.

Strong capital levels, mandated by the regulations, coupled with the assistance of the central bank, he contended, saw these firms successfully navigate the crisis.

According to the FSC head, capital levels of Jamaica's securities firms have grown in every quarter of 2009, a fact which, he said "evinces their ability to maintain and exceed the capital adequacy levels set by the FSC."

Making clear that notwith-standing his caution against over-regulation, a free-for-all approach would simply not do, Barnett indicated to the fifth regional conference on investments and capital markets staged by the Jamaica Stock Exchange at the Jamaica Pegasus hotel, that there was world-wide agreement that the light-touch approach to regulation precipitated the current global financial crisis.

Even in the aftermath of the crisis, he added, regulation of cross-border entities remained of great concern to regulators across the globe.

"Cross-border information sharing is of paramount importance in the monitoring and supervision of these institutions. The European-Union has proposed a European wide regulator and the US, a super-regulator," he reminded.

He suggested that regulators are seeking the best option available to reduce adverse exposure from foreign-based institutions and products, noting that what has been termed, a "global deal" for regulation, was also being discussed even though agreement on any such broad umbrella watchdog regime appeared remote.

As Barnett indicated, the closest the world has come to agreeing on anything near a financial services czar and global rules are the principles emanating from the International Organisation of Securities Commissions (IOSCO).

"In the interim, with the adoption of the ISOCO principles as well as the ISOCO Multilateral Memorandum of Understanding (MMOU), an 'A' signatory status will have to suffice," said Barnett.

The FSC was recently confirmed as having a 'B' status, which means that certain regulatory enhancements must occur before Jamaica achieve 'A' ranking to qualify for signing on to the MMOU.

The IOSCO principles, adopted in September 1998, are the key global standards for securities market regulation.

The main objectives are to protect investors, to ensure fair, efficient and transparent securities markets and to reduce systemic risk.

The guidelines are used by international financial institutions such as the IMF, and the World Bank, to assess a country's practice of regulation and supervision of securities markets.