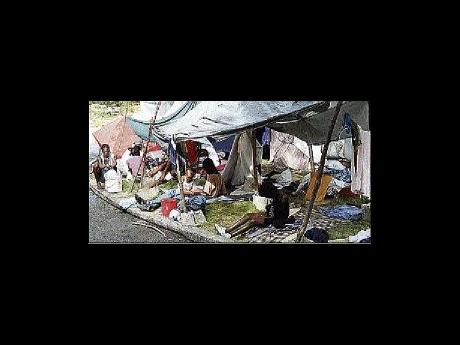 These Haitians, though living under makeshift tents which can't be expected to last very long, are still better off than many, who only have blankets and the night sky for shelter. - photo by Ian Allen/Photographer

The dusty football field lined with spacious tents is an oasis for earthquake survivors among Haiti's homeless sheltering by the hundreds of thousands in squalid camps.

Competition for the canvas homes has boiled into arguments and machete fights, a sign of the desperation felt by the hundreds of thousands of people without homes struggling for shelter in this wrecked city. Haiti's president has asked the world for 200,000 tents and says he will sleep in one himself.

Fenela Jacobs, 39, lives in a 13-by-13-foot (4-by-4-metre) abode provided by the Britain-based Islamic Relief Worldwide. She says the group offered her two tents for 21 survivors but she ended up putting everyone in one tent after people threatened to burn both down if she didn't give a tent up.

Still, she says living in the 6-foot-high (2-metre-tall) khaki home with a paisley interior is better than the makeshift shelters crafted from bed sheets propped on wooden sticks where her family was living before.

Tents are in desperately short supply following the 7.0-magnitude quake on January 12 that killed at least 150,000 people.

The global agency supplying tents said it already had 10,000 stored in Haiti and at least 30,000 more would be arriving. But that "is unlikely to address the extensive shelter needs," the International Organisation for Migration stressed.