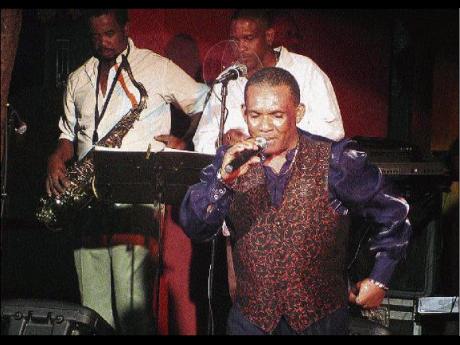 On Sunday night, Ken Boothe walked out of the darkness, red vest rich against an otherwise full-black outfit, to welcoming handclaps from an audience which, mere minutes earlier, had been clapping impatiently for showtime. Two songs into his perfor-mance, after ending Freedom Street like a boxer rattling away at an overhead punching bag to the crescendo of Lloyd Parkes and We The People Band then leaping to land in a simulation of a gymnast's dismount, a trickle of sweat was making its way down from Boothe's left temple.

It was the beginning of a delightful main course of music on the grounds of Studio 38, Pulse Headquarters, the chunk of Boothe's catalogue of hits served up to a large audience that was expressively appreciative of his performance in an all too rare format. Boothe seemed to appreciate the format - Lloyd Parkes and We The People along with Clancy Eccles Jr, a break and then Boothe - as well, congratulating Pulse boss Kingsley Cooper on a good promotion a couple times.

At $1,000 a pop, the second concert in the fortnightly Studio 38 series - John Holt performed previously - pulled in an audience either a tad above the recession line or willing to pay the price for the up close with Ken Boothe experience. There was a very good turnout, including Beres Hammond, Bunny Rugs and Strange Jah Cole.

Boothe's incredible energy level carried through his initial 45 minutes on stage, shiny black shoes winking as he jogged backward in an oval pattern, white handkerchief flicked across his face intermittently to keep the perspiration at bay. Among the songs were When I Fall In Love, Say You and Silver Words, Boothe remembering Slim Smith, Phyllis Dillon, Joseph Hill, Hortense Ellis and Alton Ellis along the way. The band was in good nick and the sound more than adequate, Boothe wrapping up with an extended version of the standard medley he closes with on concerts with numerous performers, including The Train is Coming and Moving Away, Boothe calling out "one more verse!" to the band on Puppet on a String.

He closed with the Song of the Songbird, complete with final - or so it appeared - twirl, shimmer, leap and land, but Kingsley Cooper asked that he return. "I know he hasn't started yet. Lloyd, I know you have more songs for Ken, about two dozen or three dozen," said Cooper.

The tone of the concert changed when Boothe returned. The over-the-top excitement simmered to a rocking, deep appreciation, the audience applauding when Boothe gave thanks for being still able to perform, saying he will soon be 62 years old. Among the songs in the 27-minute second segment were a capella odes to country ("and if your heart is clean/I know you will redeem/in the land of the black, gold and the green") and family ("Kim, Kim, my pretty little baby/she's the one I love most of all").

The band played for Is It Because I'm Black and Artibella, Boothe stomping a leg to the mix as he demonstrated a dancehall touch, saying that while a form of music is now called dancehall it is a place he has been going to from the 1960s.

Coming up to the close, before doing Just Another Girl, there was a pause as band and singer got in sync. And there were a couple false starts in the second segment of Boothe's performance when he said: "We are trying to find songs to play for you. Do you have the patience?" The audience members did.

Boothe sang his way back into the darkness, singing "thinking it was just you and me" to wrap up the night.

In the earlier going, Eccles had shown himself to be the showman, crooning directly to a lady or two on Three Times a Lady, dancing with a willing partner on a slow song and shaking a leg to Ladies Night.

The only snagging point for the night was a promised 10-minute break before Boothe's perfor-mance, which grew into nearly half an hour, the audience clapping for showtime as patience dwindled.