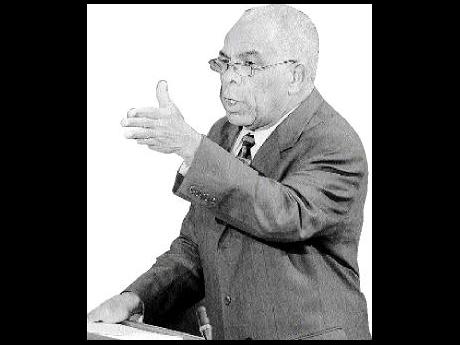 OPPOSITION SPOKESMAN on Finance Dr Omar Davies yesterday warned that the Government could be setting up the country for failure if it made unrealistic assumptions in order to meet International Monetary Fund (IMF) preconditionalities.

In the highly anticipated debate in Gordon House, Davies suggested that the debt-exchange programme, now being pursued by the Bruce Golding administration, should not be viewed as the be-all and end-all of the country's chronic economic plight.

Davies posed critical questions in relation to the Government's letter of intent to the IMF.

He told his parliamentary colleagues that the debt-exchange programme would transfer about 3.5 per cent of gross domestic product (GDP) from private households, representing sums that would have been due to them during the fiscal year. "It is the same as a tax package," he declared.

The former finance minister said the three tax packages imposed on Jamaicans over an eight-month period, in addition to the debt-exchange programme, would extract some $80 billion from Jamaicans over a one-year period.

"If you take the additional tax packages and you take the debt-exchange programme … if all four are successful, then you are speaking about a transfer of over seven per cent of GDP from private households - $80 billion transferred this year. Is this feasible?" he questioned.

The opposition spokesman wants the Government to indicate what were the assumptions supporting a six to seven per cent inflation out-turn for fiscal year 2010/2011.

He also pressed for answers in relation to assumptions regarding the price of oil on the world market going forward, as well as the implications of the ad valorem tax on gasolene imposed by the Government earlier this month.

Davies made it clear that pension funds would be hit hard by the debt-exchange programme. "Pension funds are going to be hurting. In terms of the debt exchange, they will be seeing significant cuts," he said.

Commenting on the Financial Sector Support Fund under the debt-exchange programme, Dr Davies questioned why an allocation of US$1 billion was made to the fund.

He asked whether the Government anticipated that the need for support would be great.

Davies wanted to know whether the sum to be allocated to the fund would be taken from the US$2.4 billion to be provided by the multilaterals.

"However, if US$1 billion from this support is being put aside, this reduces the amount available for addressing the fiscal needs," he said.

The opposition spokesman also had concerns about the net international reserves (NIR) which was projected to be at US$1 billion at the end of fiscal year 2010/2011. He said this fall in the NIR would reduce the Bank of Jamaica's ability to intervene in the foreign-exchange market, if there was instability.