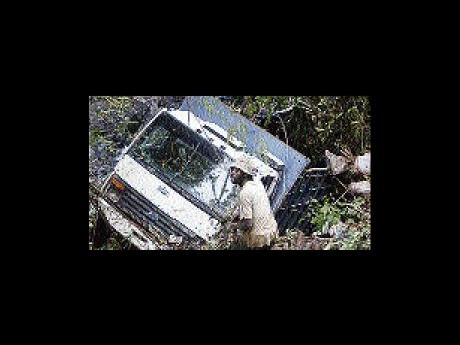 The ill-fated truck that plunged over a precipice at Dam Bridge, Portland, resulting in 14 deaths on December 19, 2008. - File

A TRUST fund set up by the Office of the Prime Minister, to assist children in the Rio Grande Valley of Portland who lost breadwinners in a truck accident in 2008, is rapidly dwindling.

The fund, set up in January 2009, aims to assist 42 students. Alloca-tions are to be made to parents or guardians monthly.

Fourteen people, including a 10-year-old boy, perished after a market truck transporting higglers to Coronation Market in Kingston plunged over a precipice at Dam Bridge, Portland.

The Poor Relief Department of the Portland Parish Council was given responsibility for the oversight and distribution of money, which would see each child receiving $5,000 towards health care, nutrition, travel and basic school items.

"We started the allocation procedure 'round about August last year," said Joan Thomas, director of finance at the Portland Parish Council. "This was done so as to ensure that each child would be able to attend school at the start of the new school year in September. Since then, we have made multiple allocations, although we also had to make special provisions for some students who needed money to pay for subjects in the Caribbean Examinations Council."

Thomas explained that although such provision was never included in the initial allocation of the trust fund, that decision was taken after consultation.

"It is really a reimbursable fund, and whenever requests are made in a timely manner, we try to assist, especially if the need is great. Whenever an extraordinary payment is made to students, that amount has to be reclaimed by us, so as to keep the funds afloat as the funds are limited," Thomas further commented.

But while the finance director sought to explain the disbursement process for the fund, which at September 2009 amounted to approximately $5.5 million, some beneficiaries have reacted angrily at the Poor Relief Department for failing to make payments to them for November.

"I have six children attending school," said 43-year-old Althea Douglas, who has two other children. "I am in no position to support them, as I am unemployed. I received money for my six children in October, and December, but I did not get any in November.

"It is really difficult for me, and I would like to know why we did not receive money from the special fund in November."

Douglas lost her common-law husband and breadwinner, Lebert Rogers, in the horrific truck accident on December 19, 2008.

Others, such as Leon Palmer and Lorenzo Harris, have also expressed disappointment at not receiving November payments.

The finance director said she could not confirm whether the payments were made.

"We have made extraordinary payments that were not originally a part of the trust fund, for emergency purposes to students. It is important also to note that we (Portland Parish Council) were asked by the Office of the Prime Minister to handle the disbursement of the funds for six months. Unless an extension is granted, all of this could be terminated by February," Thomas added.