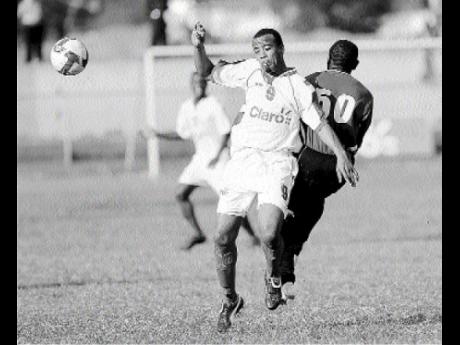 Boys' Town ran riot in an 11-0 mauling of Major League team Greenwich Town to book a semi-final date with August Town, who got the better of Arnett Gardens 3-0, in the second-leg quarter-final fixtures of the Claro/KSAFA Jackie Bell KO competition yesterday.

Boys' Town's less fancied opponents had proved problematic for the Premier League team in the first leg fixture at Tinson Pen, where they played to a 2-2 draw. But there were no such problems at Collie Smith Drive as the hosts smashed four goals past their lower league opponents before the half-time whistle.

Michael Campell, one of few players left out of the first game, opened the scoring for the Red Brigade in the 12th minute. George Vernal extended the lead in the 30th, before two quick goals by Peter Keyes in the 43rd and 44th minute signalled the rout was on.

Renae Lloyd, who was guilty of missing a few gilt-edged chances in the first half, finally made good in the 58th minute, weaving into the area before cracking a fierce shot into the back of the net off the inside post, albeit from a tough angle.

Lloyd scored again in the 71st minute. Former Bridgeport schoolboy standout, Jamiel Hardware, came off the bench to score in the 79th, Robert Scott scored in the 80th and a 25-yard drive from rugged defender Romando Johnson sealed a classic Boys' Town win.

"All of 11 goals; which coach would not be happy with that," said Boys' Town's coach, Andrew Price. "Our big win was a combination of putting out a few of our first string players and a better surface. On their home ground we weren't able to play our quick passing game, but here we were really able to stretch them out."

At the UWI Bowl Kemar Cockburn put August Town ahead in the 41st minute, before goals by central midfielder Aphas Bernard in the 50th and 79th minutes secured the win.

"All of 11 goals; which coach would not be happy with that" - Price